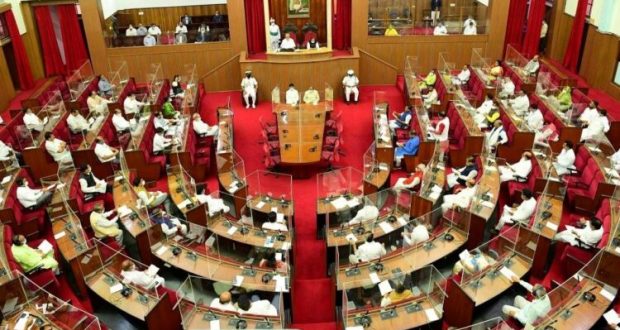 As soon as the House assembled for the day at 10.30 a.m., BJP members rushed to the well-holding banners and raised slogans demanding the removal of MoS, Home, Dibya Shankar Mishra for his alleged close relationship with the prime accused in the case. The BJP legislators also demanded a CBI probe into the incident.

In a counter-strategy against BJP, the treasury bench members today sat on a ‘dharna’ in front of the Mahatma Gandhi statue inside the Assembly premises protesting against the hike in prices of LPG cylinders.

Speaking to reporters outside the House, opposition chief whip (BJP) Mohan Majhi said, “We are demanding the removal of Mishra and CBI probe into the Mamita Meher murder case. When we raised this issue during the question hour, the Speaker did not pay heed to our demands. So, we went to the well to press for it.”

Raising questions on adjournment of the House till 4 p.m., the BJP legislator said the proceedings usually get adjourned for an hour during question hour. But, today, the Speaker adjourned the House directly till 4 p.m.

The BJP had also brought an adjournment motion notice over the deteriorating law and order situation in the state today, he said.

“It seems that the Speaker does not want the issue to be discussed in the Assembly and under pressure from the BJD government, he adjourned the House till 4 p.m,” alleged Majhi.

The BJP will continue to raise the issue in the House till the demand is not fulfilled, he warned.

2021-12-02
Editor in chief
Previous: Paika Rebellion could not be called the first war of Independence:Indian Council of Historical Research
Next: Two confirmed cases of coronavirus Omicron variant have been detected in India