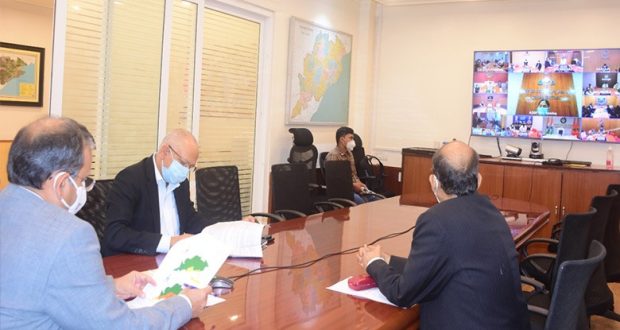 Bhubaneswar:1/12/21: Chief Secretary Suresh Chandra Mahapatra on Wednesday chaired a high-level review and preparatory meeting over the upcoming cyclone which is likely to hit Odisha coast on December 4 morning.

Speaking at the meeting, Jena said that ODRAF, NDRF, and Fire Service teams are kept ready for mobilization. Around 108 ODRAF and NDRF teams and 200 fire service teams will be deployed as per requirements in the vulnerable districts.

Mahapatra directed officials to address water logging issues effectively in cities like Cuttack, Bhubaneswar, Balasore, Bhadrak, Jajpur etc. “Pumpsets should be kept ready for dewatering low-lying areas in the urban belts. Appropriate steps should be taken to communicate information to farmers for safety and protection of crops,” the Chief Secretary directed Collectors.

Once the path of the cyclone is ascertained, evacuation process should be expedited and the people should be accommodated in cyclone shelters. These facilities should be kept ready beforehand with food and other necessary materials, said Mahapatra. The districts have been asked to carry out miking for making people aware of the situation and cooperating with the administration.