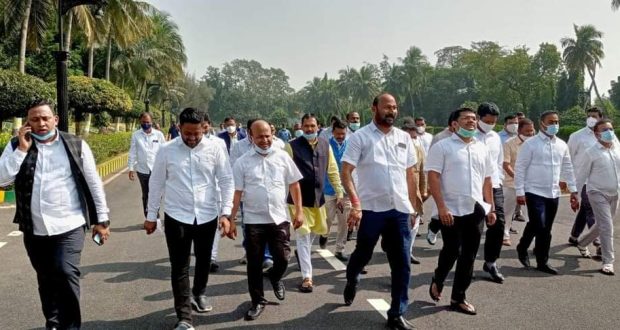 in State News December 1, 2021 Comments Off on BJD launched a protest rally alleging negligence of the Centre towards Odisha in the Pradhan Matri Awas Yojana 138 Views

Bhubaneswar:1/12/21: The Biju Janata Dal (BJD) on Wednesday launched a protest rally from the Odisha Assembly to the Raj Bhavan (Governor’s residence) alleging negligence of the Centre towards Odisha in the Pradhan Matri Awas Yojana (PMAY) scheme.

Subsequently, the ruling party staged a protest in front of the Governor’s House.

The party alleged that the Centre has provided only five lakh houses as against the requirement of 13 lakh houses to the state, under PMAY.

The BJD said that it will intensify its protest in the coming days if the demands are not met.

Chief Minister Naveen Patnaik had earlier urged the Centre to allow the remaining eight lakh houses but the latter has not paid any heed to the demand.

2021-12-01
Editor in chief
Previous: Odisha Finance Minister Niranjan Pujari presented the supplementary budget worth Rs 19,833 crore for 2021-22.
Next: Winter Session of Odisha Assembly began on a stormy note as Congress members resorted to a dharna at the entrances of the House