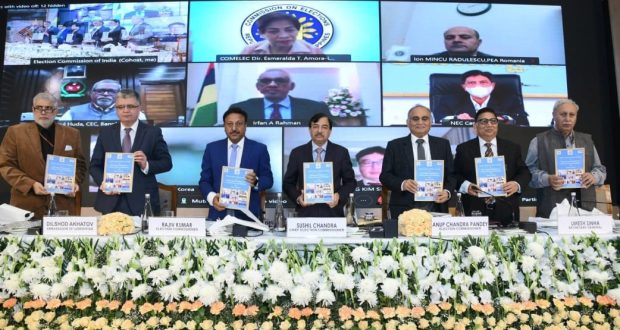 Newdelhi:26/11/21:The Election Commission of India today organized an international webinar on the theme ‘Enhancing electoral participation of Women, Persons with Disabilities (PwDs) & Senior citizen Voters: Sharing Best Practices and New Initiatives at New Delhi. The webinar which was organized to mark the completion of two years of Chairmanship of the ECI at A-WEB was attended by over 100 delegates from 24 countries, 4 international organizations, and 20 diplomats.

As the current Chairman of A-WEB, Chief Election Commissioner of India, Shri Sushil Chandra during his keynote address said that this webinar provided an excellent opportunity to learn from the best practices and experiences of other Election Management Bodies (EMBs), to identify and work towards removing barriers to ensure truly accessible, inclusive and participative elections.

Taking note of the historical perspective of barriers and challenges faced by women in participation in elections in India, Sh. Chandra stated that after 7 decades and 17 General Elections since Independence, women’s participation in India has exceeded that of men and stood at more than 67% in the 2019 General Election. Gender gap, a crucial parameter, which was -16.71% in 1962, has not only closed but reversed to +0.17% in 2019. In fact India has witnessed a 235.72% increase in female electors since the 1971 elections. Sh. Chandra highlighted various initiatives taken by the ECI to enhance women participation including associating more women as polling booth officials, larger number of All Women Managed Polling Stations, crèche facility at Polling Stations, separate toilets and waiting area at the polling booths, ensuring ease of registration with women Block level Officers motivating women in their own socio-cultural milieu, amongst others. During his address, Shri Sushil Chandra also elaborated on the concept of Absentee voter facilitation, introduced by ECI in 2020 to ensure voting facility at the doorstep especially for 80+ senior citizens, PwDs and COVID-affected voters. He added that such postal ballot facility had been successfully implemented across six state assembly elections including Bihar, Assam, West Bengal, Tamil Nadu, Kerala and UT Puducherry, which had a cumulative elector base of 73.6 million. He highlighted that, in the last five state assembly elections, 4.5 times higher electors participated in the electoral process through postal ballots and there is scope for widening the outreach and facilitation efforts. He added that there are around 15 million 80+ electors today in the country.

Pointing out the infrastructural & attitudinal challenges faced by Persons with Disabilities, Sh. Chandra urged all the participants to have ‘Accessibility focus’ as part of the design itself for any technology or service adopted by any EMB rather than being added on later as an afterthought. He cited various initiatives taken by ECI like PwD app, provision of a wheelchair, volunteer assistance, Braille EPIC card, Braille signage in EVMs, free transport to and from the polling station, priority voting, and provision of AMFs to provide a hassle-free experience to PwD electors.

Addressing the gathering, Election Commissioner Shri Rajiv Kumar stressed on the initiatives taken by the Commission to enhance the participation of Women & people with disabilities in the electoral process. He underscored that ECI has mapped over 7.7 million PwD voters so far which is a remarkable increase of 15.28 percent from the Lok Sabha Election 2019.  While highlighting the enhanced women participation in the electoral process from 78 million women in the first GE to over 294 million in the 2019 LS elections, he stated that even in terms of representation, the number of women elected to the lower house of the parliament increased from 24 in the first General Election to 78 in 2019 LS elections.

While addressing the participants, Election Commissioner Shri Anup Chandra Pandey stated that Technology has been a game-changer in election management and has had a significant impact upon the electoral landscape vis-a-vis accessibility. Taking note of the challenges faced to ensure inclusive & accessible elections during the COVID pandemic, Sh. Pandey said that detailed protocols were devised and implemented to distribute and collect forms from senior citizens and PwDs at their homes as part of the postal ballot facility. He said that ECI is committed to inclusive electoral practices to enhance participation and extend facilitation to PwD voters.

Welcoming the delegates, Secretary-General Sh. Umesh Sinha said that the inclusion of all categories of voters in electoral participation is the essence of universal adult suffrage. He also touched upon the ECI voter education program SVEEP aimed at reaching out to the vast voter population in a comprehensive and systematic manner through different modes and media. ECI’s endeavor is to speak to PwDs in their language, to hear what they wish to convey, and see all those invisible barriers that they find difficult to circumvent, he underlined.

At the Webinar, presentations made by Mauritius,   Romania and  Republic of Korea, Taiwan, The Philippines, Cambodia and IFES – Sri Lanka, South Africa, Bhutan, India and Brazil showcased best practices and initiatives taken by them to enhance electoral participation of Women, Persons with Disabilities (PwDs) & Senior citizen Voters.

Among publications released at the Webinar was the October 2021 issue of A-WEB India Journal of Elections; October 2021 issue of ‘VoICE International’ Magazine and Publication on ‘Participation of Women, Persons with Disabilities and senior citizen voters in Elections’. An International Video presentation on facilitation and participation of Women, PwDs and senior citizens in elections was also unveiled at the Webinar.

An exhibition on various initiatives taken by Election Management Bodies to enhance the electoral participation of women, PwDs and senior citizens was also displayed during the international webinar.