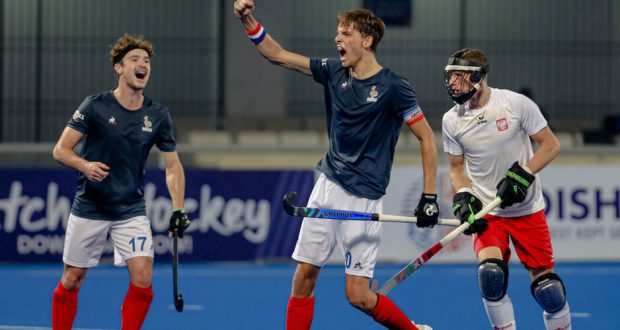 Bhubaneswar: 25/11/21:In-form France continued their momentum to register a comprehensive 7-1 victory over Poland in a Pool B game of the Junior Men’s Hockey World Cup at the Kalinga Stadium in Bhubaneswar on Thursday.

This is the second win of France in as many matches. Earlier yesterday they had stunned defending champions India in their first match.

Corentin Sellier was the star performer for the winning team as he struck a hat-trick by scoring in the 11th, 27th, and 34th minutes respectively. Skipper Timothee Clement (3rd and 36th) scored a brace while Antonin Igau (Ist) and Jules Bournac (54th) netted the ball once each.

France dominated the game completely giving little space to the opponents. They were faster and agile in the field. They played long passes to outwit their opponents.

Though, Poland players were more skillful, they lagged behind their opponents in terms of pace and adept maneuvering.

In the second quarter, Poland tried their best to make a comeback into the match, but their opponents were proved to be too good for them.

“We have started well in the tournament. But our job is half done. We want to continue our momentum in a similar vein throughout the competition,” said France coach Aymeric Bergamo.

Hosts India will take on Canada in their second match today.