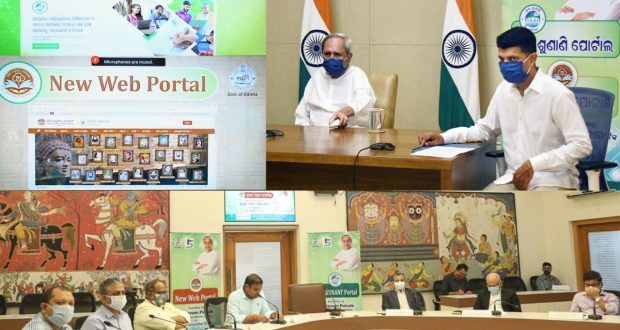 Bhubaneswar:24/11/21: Odisha Chief Minister Naveen Patnaik on Wednesday unveiled the ‘Janasunani Portal’ of the Department of Electronics and IT, and the revamped web portal of ‘Odia Virtual Academy’ (OVA) established by the Department of Odia Language, Literature and Culture.

The online integrated grievance redressal management application will serve as a bridge between citizens and the Govt, for faster grievance redressal while the new website of Odia Virtual Academy will play a significant role in the preservation & promotion of Odia language & literature. With the addition of the latest features, the portal will ensure a better user experience and ease of navigation.

On this occasion, Chief Minister said that his government is committed to providing home-based services with the help of technical know-how through 5T initiative. People could avail themselves services from the government without going to any government office. “With this new portal, people will be able to file complaints on various digital platforms,” ​​he said.

The Chief Minister lauded the Department of Electronics and IT for its use of state-of-the-art technology such as Artificial Intelligence and Machine Learning.

With this new ‘Janasunani Portal’ of the Department of Electronics and IT, the public can file a complaint at any time online from anywhere. This has made the grievance process easier, simpler, and more timely. Complaints can be made through websites, mobile apps, web chatbot, WhatsApp, emails, and social media handles such as Twitter and Facebook.

The complainant can also find out the status of his complaint on this integrated portal. They will also be notified of the progress of the complaint via SMS and WhatsApp, the CM added.

Inaugurating the new web portal of the Odia Virtual Academy, the Chief Minister said that it would make many rare books, manuscripts, newspapers, dictionaries, and language primaries for children more popular in Odia literature as well as Odias living at home and abroad.

The Odia Virtual Academy was launched on October 26, 2018. To date, 2,700 rare books have been digitized in Unicode format and placed on the Web Portal. In addition, the process of preserving the PDF copies of tens of thousands of books is underway.

On the occasion, the Minister for Electronics and IT, Tusharkanti Behera, said that the ‘Janasunani Portal’ was a key feature of the Chief Minister’s 5T programs.