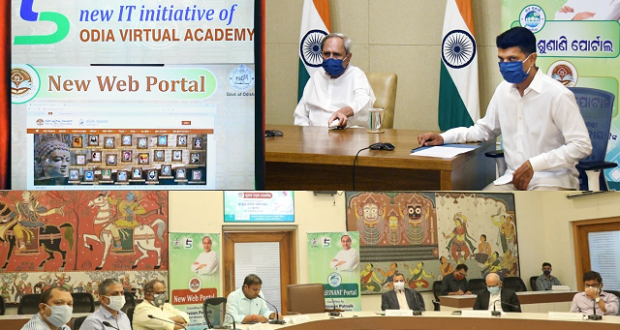 On the occasion, Naveen said that all programmes of the State Government are directed towards the people of Odisha. “We are committed to reaching out to people at their homes with the 5T principles driven by technology among other important pillars of governance.”

Inaugurating the new web portal of the Odia Virtual Academy, the Chief Minister said that it would make many rare books, manuscripts, newspapers, dictionaries, and language primaries for children more popular in Odia literature as well as Odias living at home and abroad.

The Odia Virtual Academy was launched on October 26, 2018. To date, 2,700 rare books have been digitized in Unicode format and placed on the Web Portal. In addition, the process of preserving the PDF copies of tens of thousands of books is underway.

Electronics and IT Minister Tusharkanti Behera said the new portal is a major achievement under 5T principles of the State Government. Secretary to CM (5T) VK Pandian coordinated the programme. Department Secretary Manoj Mishra also spoke on the occasion.