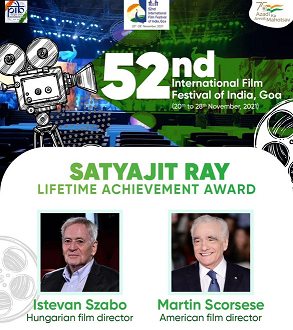 in Entertainment, International 20 days ago 0 62 Views

The two icons of International cinema will convey their acceptance of the Award through video messages at the opening ceremony. Regarded by many as one of the best cinematic minds of the 21st Century, Martin Scorsese is a Hollywood filmmaker who has created masterpieces like Goodfellas, Taxi Driver, Raging Bull, The Departed, Shutter Island, The World of the Wall Street, etc.

Martin Scorsese was born in Queens, New York City and he forayed into the world of films by making short films like The Big Shave and It’s Not Just You, Murray.

Scorsese has founded the nonprofit organization The Film Foundation in 1990, the World Cinema Foundation in 2007 and the African Film Heritage Project in 2017.

He has won numerous awards including the Golden Globe, BAFTA, and Academy Awards for his films.  In a career spanning more than five decades, Scorsese has directed & produced more than 90 feature films, documentary films, shorts films, television shows, and music videos.

Istevan Szabo, is one of the most critically acclaimed Hungarian film directors. He was born in Budapest and from an early age, he developed a keen interest in filmmaking.

For his masterpiece Mephisto, Szabo won the Academy Award for the Best Foreign Language Film.  He is known for films like Father, Colonel Redl, Sunshine, Taking Sides, Being Julia, etc.

Apart from writing and directing films, Szabo has also worked in writing and directing television movies and episodes, short films, and documentaries, as well as serving as an assistant director, screenwriter, producer, and actor in films. He is known for his auteuristic style of direction. Szabo has directed several operas & also taught in many film schools across Europe.

Satyajit Ray is considered one of the pioneers of the modern cinema and he is revered by cine-buffs across the world. His works like The Apu Trilogy, The Music Room, etc. cemented his footing in the history of Indian cinema and remain classics till date.