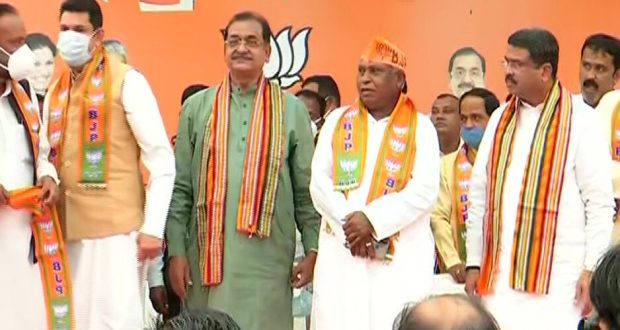 Bhubaneswar:19/11/21; Four-time MLA and former Minister Sanjeev Sahoo, who had recently parted ways with the BJD, joined the BJP at a ‘Mishran Parva’ organized at the saffron party’s office in Bhubaneswar on Friday. In the presence of Union Minister Dharmendra Pradhan, State BJP president Samir Mohanty and other leaders, Sahoo joined the BJP.

Later while addressing media persons, Sahoo said, “I left BJD to join BJP because I have been immensely inspired by the wheel of progress set into motion by Prime Minister Narendra Modi in India and Dharmendra Pradhan in eastern India. I have always been thinking about the development of Athamallik. Whatever developmental projects I had initiated have all come to a standstill after the 2019 Assembly elections.”

“I had taken a vow at the Maa Maheswari shrine that if I was elected, I would think only about the development of Athamalik. But, what happened later is known to all. In the coming days, I will do my level best to resume the process of development in Athamallik and for this, I will value people’s opinions. Everyone should cooperate for the overall development,” he further added.