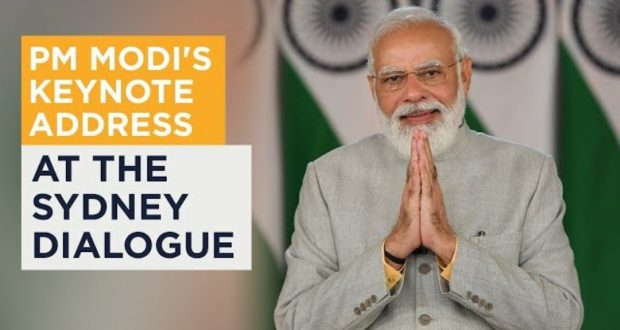 The Prime Minister, Shri Modi noted recognition for India’s central role in the Indo-Pacific region and in the emerging digital world. Noting the benefits of the digital age, the Prime Minister also said that the world also faces new risks and new forms of conflicts across diverse threats from sea-bed to cyber to space. “The biggest strength of democracy is openness. At the same time, we should not allow a few vested interests to misuse this openness”, the Prime Minister said.

The Prime Minister said, as a democracy and a digital leader, India is ready to work with partners for shared prosperity and security. “India’s digital revolution is rooted in our democracy, our demography, and the scale of our economy. It is powered by enterprise and innovation of our youth. We are turning the challenges of the past into an opportunity to take a leap into the future”

The Prime Minister listed five important transitions taking place in India. One, the world’s most extensive public information infrastructure being built in India.  Over 1.3 billion Indians have a unique digital identity, six hundred thousand villages will soon be connected with broadband and the world’s most efficient payment infrastructure, the UPI. Two, use of digital technology for governance, inclusion, empowerment, connectivity, delivery of benefits, and welfare. Three, India has the world’s third-largest and fastest-growing Startup Ecosystem. Four, India’s industry and services sectors, even agriculture, are undergoing massive digital transformation. Five, there is a large effort to prepare India for the future. “We are investing in developing indigenous capabilities in telecom technology such as 5G and 6G. India is one of the leading nations in artificial intelligence and machine learning, especially in the human-centered and ethical use of artificial intelligence. We are developing strong capabilities in Cloud platforms and cloud computing”, he added.

Talking about the resilience and digital sovereignty of India, the Prime Minister said  “we are focusing on hardware. We are preparing a package of incentives to become a key manufacturer of semi-conductors. Our production linked incentive schemes in electronics and telecom are already attracting local and global players to set up base in India”. He also asserted India’s commitment to data protection, privacy, and security. “At the same time, we use data as a source of empowerment of people. India has unmatched experience in doing this in a democratic framework with strong guarantees of individual rights”, said the Prime Minister.

The Prime Minister said India’s contribution in coping with the Y2K problem and its offering CoWin platform to the world as open-source software are examples of  India’s values and vision. “India’s democratic traditions are old; its modern institutions are strong. And, we have always believed in the world as one family”, he said.

Shri Modi said India’s extensive experience with the use of technology and policy for the public good, inclusive development, and social empowerment can be of great help to the developing world. “We can work together to empower nations and their people, and prepare them for the opportunities of this century”, he remarked.

Giving a roadmap for democracies to work together, Shri Modi called for a collaborative framework “to invest together in research and development in future technology; To develop trusted manufacturing base and trusted supply chains; To deepen intelligence and operational cooperation on cyber security, protect critical information infrastructure; To prevent manipulation of public opinions; To develop technical and governance standards and norms consistent with our democratic values; and, To create standards and norms for data governance and for cross-border flow that protect and secure data.” He said emerging framework “should also recognise national rights and, at the same time, promote trade, investment and larger public good”.

In this context he cited the example of crypto-currency and said “It is important that all democratic nations work together on this and ensure it does not end up in wrong hands, which can spoil our youth”.

International Film Festival of India comes to close in Goa

The artistic imagination of the contemporary India is visible in most of the films: Nila Madhab Panda, Jury Member