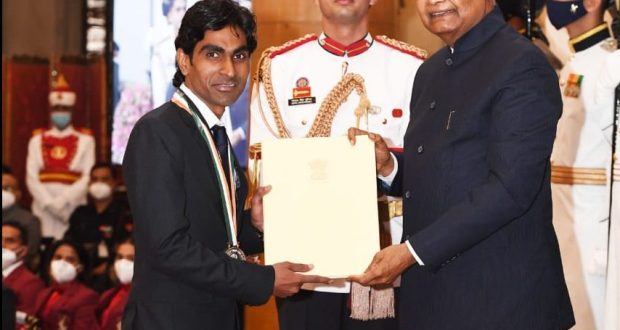 Loud applause greeted Chopra, the first Indian to win an athletics gold medal in Olympics at Tokyo earlier this year, and the Paralympics heroes as they received the Khel Ratna awards from President Ram Nath Kovind in the presence of a host of Ministers, dignitaries, and sports celebrities.

A large number of nominations were received for these awards this year, which were considered by the selection committee headed by Justice (Retd) Mukundakam Sharma earlier this month.

However, Tokyo 2020 Paralympic gold medallist Krishna Nagar didn’t attend the award ceremony. There were reports that his mother passed away on Friday and that’s why he didn’t turn up for the event.

Meanwhile, all members of the men’s hockey team that won the historic bronze medal in the Tokyo 2020 Olympics have been awarded Arjuna Award except Sreejesh and Manpreet, both of whom had already received it in the past.

India had a historic outing at the Tokyo Olympics, winning seven medals. And in the Tokyo Paralympics, Indian athletes came up with a breakaway performance with 19 medals–five gold, eight silver, and six bronze medals.