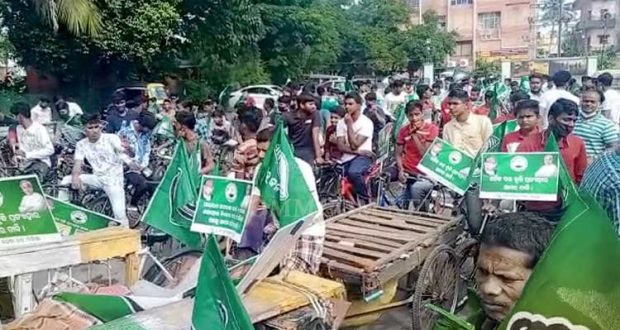 in Smartcity Bhubaneswar October 31, 2021 Comments Off on BJD Takes Out Bicycle Rally In Bhubaneswar Over Fuel Price Rise 402 Views

Bhubaneswar:31/10/21: Protesting the rise in prices of diesel, petrol, LPG, edible oil and essential commodities, the Biju Janata Dal (BJD) today took out a bicycle rally in the capital city.

BJD activists rode cycles, rickshaws, and rallied on foot from Keshari talkies to the agitation place as a mark of protest against the spiralling rise in the prices of fuel. The women workers were seen burning chullahs to protest against the hike in the price of the LPG cylinders. Led by Bhubaneswar (North) MLA Susant Kumar Rout, several BJD leaders and hundreds of party workers later staged a dharna against the Central Government near the Raj Bhavan (Governor’s House) here. A delegation of the party also met the Governor and submitted a memorandum addressed to the President of India

The BJD had yesterday announced a series of protests across the state targeting the BJP-led Central government over the issues. The BJD will organise protest meetings in all the 147 assembly constituencies of the state, tomorrow.

The party blamed the Central government’s “faulty” economic management leading to the rise in the prices of petrol, diesel, cooking gas and other essential items.