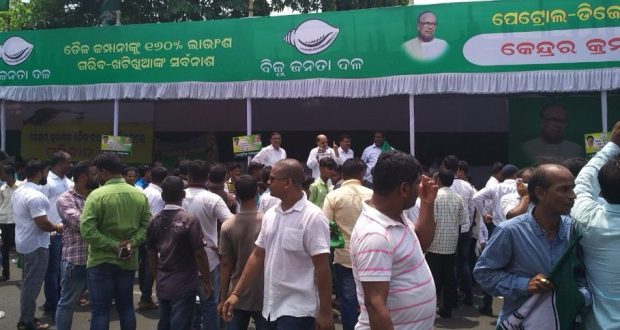 in State News October 31, 2021 Comments Off on BJD staged a protest against the steep hike in prices of petroleum products and other essential commodities 182 Views

Bhubaneswar:31/10/21: The ruling Biju Janata Dal (BJD) staged a protest against the steep hike in prices of petroleum products and other essential commodities in the State.

Hundreds of agitating ruling party workers hit the streets with bullock carts, bicycles, and trolleys and demanded immediate cuts in the fuel prices.

Later, a delegation of the members of the ruling party met Governor Professor Ganeshi Lal and submitted a memorandum to him addressed to President Ram Nath Kovind.

The BJD also threatened to launch a State-wide protest in case the Centre fails to take necessary steps to address the price hike.

Meanwhile, Opposition BJP and Congress have alleged that the ruling BJD is organising such protests to divert the attention of people from the sensational Mamita Meher murder case.