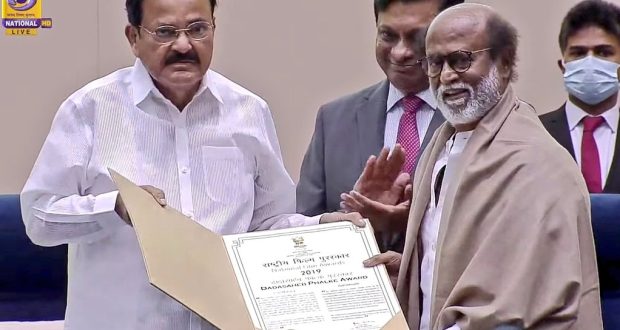 Speaking after presenting the prestigious Dadasaheb Phalke award to popular actor Shri Rajnikanth and national awards to actors of cinemas of various languages, the Vice President said a film should be a vehicle with a higher purpose—a carrier of social, moral, and ethical message. “Moreover, films should refrain from highlighting the violence and should voice society’s disapproval of social evils,’ he added.

Observing that a good film has the power to touch hearts and minds, Shri Naidu said cinema is the cheapest entertainment in the world and urged filmmakers and artists to use it for the betterment of the people, society, and nation.

Stressing the need for cinema to usher in positivity and happiness, he said “Experience tells us that a film with a message has lasting appeal”. Apart from entertainment, cinema also has the power to provide enlightenment.

Speaking on the occasion Shri Anurag Thakur said that entertainment should be equally accessible to all sections of society. This Government has made the COVID19 vaccine accessible to both the rich and poor and similarly both the poor and the rich should have equal rights to entertainment. The Minister exhorted the film industry to find ways to take cinema simultaneously to audience in rural and remote areas.

The Minister added that commemorating 75 years of Indian Independence, we have opened our platform for 75 young creative minds of India. 52nd IFFI will provide a platform to 75 immensely talented youngsters to showcase their talent on a world stage. The Directorate of Film Festivals is inviting entries from amateur filmmakers and cinema buffs around the country. 75 best entries in the competition will be invited as delegates to Asia’s oldest film festival, IFFI.

Tajmahal (Marathi) has been awarded Nargis Dutt Award for Best Feature Film on National Integration. Shri Dhanush and Shri Manoj Bajpayee have both been conferred the Best Actor award while Ms. Kangana Ranaut has been awarded Best Actress for her role in Manikarnika-The Queen of Jhansi (Hindi) and Panga (Hindi). The star-studded award ceremony also witnessed recognition of power-packed performers like Shri Vijaya Sethupathi, Smt Pallavi Joshi, Shri B Praak among others.