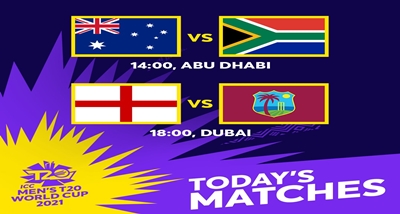 Abu Dhabi :23/10/21:   In the opening match of Super-12 stage of Men’s T20 Cricket World Cup, while chasing a victory target of 119 runs, Australia were 20/2 (4.3) overs, against South Africa in Abu Dhabi when the reports last came in. The defending champions West Indies will take on England in the second match to be played in Dubai, later in the evening.

India are set to square off against Pakistan tomorrow in an all-important clash. Earlier, the first round of the ICC T20 World Cup 2021 concluded yesterday. The teams that made it out of the Super-12 round were Sri Lanka, Namibia, Scotland and Bangladesh.

There are two groups for the stage – A & B – with six teams slotted in both groups. The Super-12 stage will follow a round-robin format where each team will square off against the other five. Following the Super-12 stage, the top two teams from each group will qualify for the semifinals.

Group ‘A’ consists of India, Pakistan, New Zealand, Afghanistan, Scotland and Namibia, while Group ‘B’ has Australia, England, West Indies, South Africa, Bangladesh and Sri Lanka. Group ‘B’ is virtually touted as the group of titans, with some heavyweight teams clashing against each other.

All India Radio is broadcasting ball-by-ball commentary of the World Cup matches.