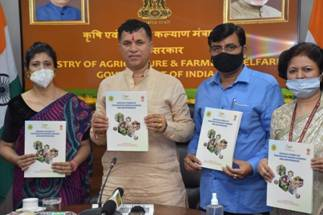 Newdelhi:22/10/21:The Department of Agriculture & Farmers Welfare organizeda webinar today on “Women in Agri-startups: Creating Value with Supply Chain Management” in the series of events for celebrating MahilaKisanDiwas 2021. The webinar was organized under the guidance of Union Agriculture Minister Shri Narendra Singh Tomar and in the august presence of Minister of State for Agriculture & Farmers WelfareShri Kailash Choudhary. During the webinar, Shri Choudhry also released an e-book depicting “Success Stories of 75 progressive women farmers and women entrepreneurs to commemorate 75 years of ‘Azadi Ka Amrit Mahotsav’.

Inaugurating the webinar, Shri Kailash Choudhary stated that women’s contribution to the development of agriculture has increased manifold. Women play a decisive role in ensuring Food Security and Preserving local Agro-Biodiversity. As per Prime Minister Shri Narendra Modi’s vision of AatmaNirbhar Bharat, the Government of India is committed to giving priority to women for bringing them into the mainstream of agriculture development. He added that the role of women is not only confined to agriculture after India’s independence but their contribution is visible in all sectors including defence, space, administration, sports, etc. It gives immense satisfaction and pride to see that women are fulfilling their dreams and reaching the thresholds in self-reliant India. The Minister also added that the formation of Farmer Producer Organizations will benefit Women Farmers in a revolutionary way.

The Webinar on Women in Agri-Startups focused on Enabling Women Entrepreneurship in Agribusiness; Strategy and Schemes to support Agri-Startups in India; Technology transfer to Startups for Commercialization; Value Chain Management and Challenges faced by Agri-StartupsAgripreneures. Agriculture sector employs 80% of all economically active women; they comprise 33% of the agricultural labor force and 48% of self-employed farmers.

With women predominant at all levels of production- pre-harvest, post-harvest processing, packaging, marketing- of the agricultural value chain, to increase productivity in agriculture, it is imperative to adopt gender-specific interventions. The Government has tried to push the agenda of ‘Gender Mainstreaming in Agriculture’ by way of earmarking funds for women under various schemes/programmes and development interventions; introducing ‘pro-women initiatives’ to help women derive the benefits of all beneficiary-oriented components of different programmes. The focus is on the formation of women Self Help Groups (SHGs), Women Federations, and Women Farmer Producer Organisations; capacity-building interventions; linking them to microcredit; enhancing their access to information, and ensuring their representation in decision making bodies at various levels.

The Senior and middle-level extension functionaries, women farmers, and agri-entrepreneurs, and resource persons from various training institutes participated in the event. The successful women entrepreneurs from various States also narrated their views and experiences on the occasion.

2021-10-22
Editor in chief
Previous: Ministers support advancement in work of the BRICS Partnership on New Industrial Revolution
Next: Anniversary of the formation of Azad Hind Government by Netaji Subhas Chandra Bose celebrated