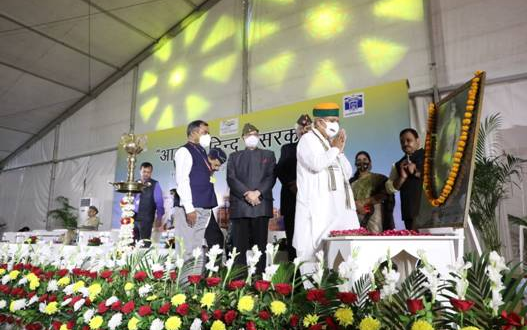 in National October 22, 2021 Comments Off on Anniversary of the formation of Azad Hind Government by Netaji Subhas Chandra Bose celebrated 210 Views

As part of Amrit Mahotsav celebrations, events have been organized in the run-up to and on 21st October in India and South East Asia to commemorate the anniversary of the formation of Azad Hind Government by Netaji Subhas Chandra Bose.  Bringing to life the whole of government approach, the Ministry of Culture spearheaded the organization of an integrated program calendar across regions and geographies with participation from various Ministries, States, and Union Territories of India.

The commemorative programs saw participation from INA veterans, school students, local communities, and others making a true embodiment of the idea of Jan Bhagidari.

Some of the key programs held as part of the commemorative initiative are as below:

A seminar on Tagore and Netaji’s unique relationship was organised by the EZCC.

The event also saw the enactment of TasherDesh, a play written by Tagore and dedicated to Netaji. (TasherDesh)

A choreographed dance-based performance was specially recorded at Subhas Gram, Kodalia at the ancestral house of Netaji.

This podcast series is a tribute to the persons and movements that significantly contributed to India’s freedom struggle, some of which have not found a place in the conventional freedom movement storyline. As an ode to the sacrifices made, it is only befitting to salute these heroes by recollecting their stories of courage and valour as part of commemorating 75 years of India’s independence.

The venue of the celebrations is historically significant, as the Royal Selangor Club is situated adjacent to the Selangor Padang (Dataran Merdeka or Independence Square), from where in September 1943, Netaji Subhash Chandra Bose, in a rousing address to thousands of followers, inspired several youths to join the cause of Indian independence. Key attendees at the event included 4 INA veterans, who also spoke at the event. Excerpts of interviews of other veterans of INA and Rani of Jhansi Regiment who were unable to join the event physically were also played during the function.

High Commissioner of India, Singapore placed a wreath at the INA Memorial. On October 21, 1943, Netaji had announced the formation of the Azad Hind Government which started functioning from Singapore with 11 ministers and eight representatives from the Indian National Army. (Event in Singapore) The commemoration of Netaji is an ongoing initiative and will culminate in a grand synthesized event on his birth anniversary on January 23, 2022.