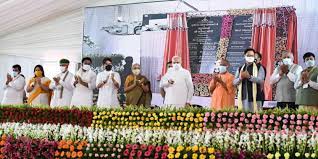 Newdelhi:20/10/21:Prime Minister Narendra Modi today inaugurated Kushinagar International Airport in Uttar Pradesh and laid the foundation stone of Rajkiya Medical College along with inaugurating and laying the foundation of various development projects. The Prime Minister also attended a programme held to mark the Abhidhamma Divas in the Mahaparinirvana Temple in which the eminent monks from the South-East Asian countries were also present. The Prime Minister also offered floral respect to the reclining statue of Lord Buddha.
Inaugurating the Kushinagar International Airport, the Prime Minister said that India is the centre of Buddhist faith and the inauguration of Kushinagar International Airport today is a tribute to Buddhism. He said that the holy land of Kushinagar is now connected with the world. He added that India is committed to developing the regions related to Buddhism and is working continuously to provide better connectivity to these holy places.

The Prime Minister said that the civil aviation sector in the country has seen an uptick in recent years.

The Prime Minister said the nation has taken a big step recently with regard to Air India. He said that this will infuse new life to the aviation sector. The Prime Minister said that India has also recently launched the Gati Shakti- National Master Plan. He said that this will enhance governance and would make the various infrastructure development sectors like road and rail to work with better coordination.

Addressing the event held to mark the auspicious Abhidhamma Divas at Mahaparinirvana temple in Kushinagar, the Prime Minister said that the Kushinagar International Airport will ease the journey of crores of Buddhists to the land of Lord Buddha. He also said that the arrival of the Sri Lankan delegation by the inaugural flight at Kushinagar International Airport today signifies the religious, social and spiritual bonds that the two countries share. He said that the two thousand years old Indo-Sri Lankan relationship is further strengthened by today’s inauguration of Kushinagar airport. He added that today the world is facing environmental problems and Buddhism has all the answers to it. The event was attended by a Sri Lankan delegation of over a hundred members including eminent Buddhist Monks and dignitaries.

The Prime Minister also addressed an event in Kushinagar after inaugurating and laying the foundation stone of various development projects. He said that when basic facilities are available, the courage to dream big and the spirit to fulfil the dreams are born. He said that today the benefits of government schemes are reaching the citizens and initiatives like providing pucca houses, toilets, electricity connections, gas connections and pure water through Nal Se Jal are instilling confidence in the poor.

The Prime Minister also said that the earlier governments neglected the development of the people and were only focused on the development of their families. Mr Modi lauded the Yogi Adityanath government for providing better law and order in the state.
The Prime Minister said that the world’s largest vaccination programme is currently underway in the country.
Mr Modi said that Uttar Pradesh is the leading state in vaccination in daily and overall vaccination. He also said that the government has helped the poor families in the rural and urban areas by providing free ration to them during the hard times of the Covid pandemic.
The Prime Minister said that Yogi Adityanath’s government has initiated various measures to benefit farmers. He also said that Uttar Pradesh is the land of unimaginable potential. He added that the inauguration of Kushinagar International Airport today will attract tourists in the region that will lead to the overall development of Purvanchal.

With the inauguration of Kushinagar International Airport, Uttar Pradesh has got its 9th airport. These are the maximum number of airports operational in any state in the country. By the year 2017, only four airports had regular flights in the state. But, now nine cities including Lucknow Varanasi Gorakhpur Agra Prayagraj Kanpur Bareilly Ghaziabad and Kushinagar have air connectivity. There are other airports lined up in the state too. The biggest airport in Greater Noida at Jewar is going to become operational by mid-2024. Ayodhya will also get Maryada Purushottam Shri Ram Airport. Airports at Jewar in Greater Noida and Ayodhya are developed as international airports and once these two are operational, the number of international airports in Uttar Pradesh will rise to 5. Currently, work on 10 cities is underway to build airports. These are Aligarh Azamgarh Moradabad Shravasti Chitrakoot Sonbhadra Agra Saharanpur Noida and Ayodhya. Uttar Pradesh is realising the dream of Prime Minister Narendra Modi of making air travel easier and accessible to the common man in true spirit.

2021-10-20
Editor in chief
Previous: Union Mines Secretary Alok Tandon has inaugurates NALCO’s Lean Slurry Project at Angul
Next: Delegations of both BJP and Congress met Governor demanding an impartial probe into the murder of lady teacher