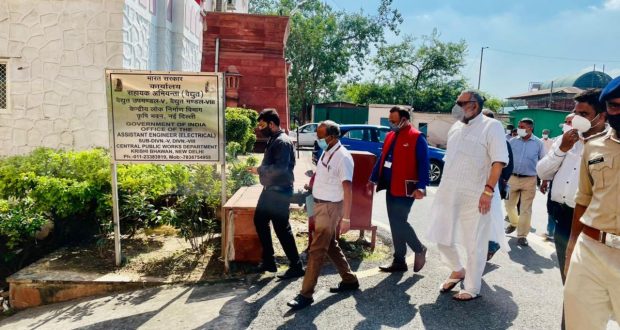 Newdelhi:19/10/21:: Under Prime Minister Narendra Modi’s leadership, while the country is celebrating Azadi ka Amrit Mahotsav to commemorate India’s 75 years of independence, strong emphasis is being laid on making India cleaner during the current month of October. Taking the mission of Swachhta & Seva to government offices, Union Minister of Rural Development & Panchayati Raj Shri Giriraj Singh today inspected various sections of the Rural Development Ministry and reviewed physical and digital cleanliness practices followed in the Ministry. The Minister directed officials to maximize the use of the E-filing system for better office management. During the inspection drive, the Minister stressed the importance of physical & digital cleanliness in the system & premises to improve the work environment, efficiency & health of the employees. Union Minister also said that under the leadership of PM Shri Narendra Modi, the Government of India is giving the highest priority to cleanliness.

Union Minister suggested that the office should leverage the use of the technology & the internet to a maximum extent and aim to achieve zero-paper functioning while expediting digitization of archives & records in a swift & secure manner. He also suggested that large obsolete machines like copiers, older furniture, ACs, etc be scrapped and auctioned in the public domain in an official & transparent manner.

Shri Giriraj Singh explained that in the age of digitization, the digital sanctity of databases is important for faster data retrieval. He also emphasized periodical maintenance & cleanup of unnecessary data. Important files pertaining to Parliament, Cabinet, RTI, Grievance, etc. be organized into a central repository for efficient information sharing across departments. He also suggested the digitization of books available in the department’s library.

During his visit to the Parliament section of the Ministry, Shri Singh stressed the importance of 3R i.e Record, Reply, and Repository, and instructed the officials to go digital and have a repository of previously asked questions.

Rural Development Secretary Shri NN Sinha and other senior officials of the Ministry accompanied the Minister during the inspection.