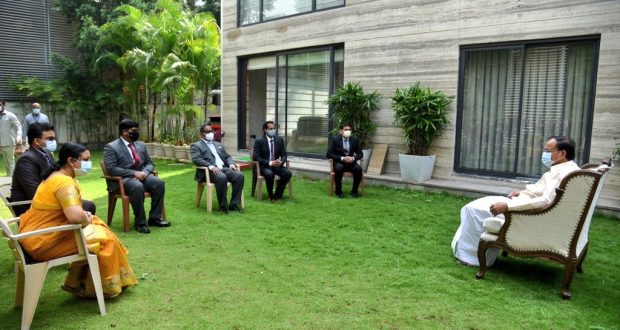 Newdelhi:19/10/21; The Vice President, Shri M. Venkaiah Naidu today emphasized the role of effective communication in good governance and called upon the public communicators to empower people through timely information on government’s policies and initiatives in local languages.

Interacting with a group of Officer Trainees of the Indian Information Service (IIS) of the 2020 batch at his residence in Hyderabad today, the Vice President said that public communicators play an important role in bridging the gap between governments and citizens. “If you inform people about various schemes in simple and clear language, they understand their entitlements and government processes in a better way. This results in transparency,” he told the probationers.

Shri Naidu further said that ‘information with confirmation’ was the key to government communication and asked the Information Service officers to focus on combating misinformation and fake news. He also asked them to work on socially relevant themes such as gender inequality and removing vaccine hesitancy among some sections of people. Calling media as a powerful tool, he wanted this tool to be used responsibly to bring about the desired transformation. “Connect, communicate and change,” the Vice President said in his signature style.

The IIS Officer Trainees are in Hyderabad as part of their training attachment to the regional office of the Press Information Bureau and other media units of the Ministry of Information and Broadcasting. Congratulating the young officers on their selection in the civil services, the Vice President said that the Information Service has a big role to play in terms of empowering people with the right information.

Recalling his own journey from being a farmer’s son to one of the highest offices of the country, Shri Naidu advised the probationers to work with undivided dedication to achieve success. “Aim high, dream big, work hard and maintain discipline – this is my mantra to succeed in life,” he told the young Civil Servants.

The Vice President also advised the Officer Trainees to keep fit by taking regular part in sports and physical activities. “In order to move towards a better future, the work done today should be in consonance with both nature and culture,” he said.