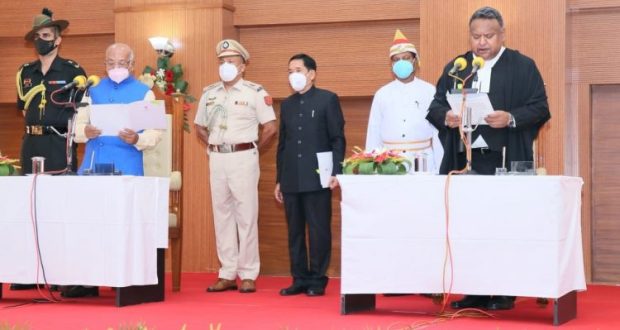 Cuttack13\10\21: Justice Indrajit Mahanty was sworn in as the sixth Chief Justice of Tripura High Court at the Raj Bhavan in Agartala on Tuesday.

Tripura Governor Satyadeo Narain Arya administered the oath of office to Chief Justice Mahanty at a simple function organised as per the COVID protocols.

Justice Mahanty was posted as a Judge in Bombay High Court before being elevated as the Chief Justice of Rajasthan HC in August 2019.

Born in Cuttack on November 11, 1960, Justice Mahanty did his LLB from the Campus Law Centre, Delhi University and LLM from the University of Cambridge, UK. His parents are late Ranjit Mahanty, Barrister at Law and advocate Shakuntala Mahanty.

Enrolled as an advocate with Orissa State Council in 1984, Justice Mahanty began legal practice under his father till his demise in 1989. Thereafter, started independent practice.