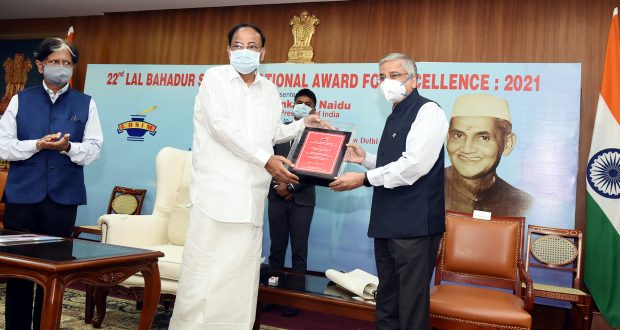 Presenting the 22nd Lal Bahadur  Shastri National Award for Excellence to eminent pulmonologist and Director of the All India Institute of Medical Sciences (AIIMS), Dr. Randeep Guleria at Upa-Rashtrapati Nivas, the Vice President said that Shastri Ji took accountability for his actions, which is a very rare quality in our public life. In this context, Shri Naidu stressed the need for upholding transparency and accountability in public life.

Recalling that Shastri Ji resigned on moral grounds following a train accident due to a technical failure, he said that the former Prime Minister’s action, including his insistence on the acceptance of his resignation, is seen to this day as the gold standard in probity in our public life.

Describing Shastri Ji as an iconic leader with an extraordinary vision for our great nation, he said that he was universally known for his austere lifestyle, humility and impeccable integrity.

During his short span as Prime Minister of India, Shastri Ji took some exceptionally bold decisions and promoted self-reliance rather than importing food supplies from other countries. He added a new dimension to his statesmanship with his courageous decisions during the war in 1965. “It was in this context of the food crisis and armed conflict with Pakistan that Shastri Ji gave the immortal slogan ‘Jai Jawan Jai Kisan”, Shri Naidu added. He said that subsequently the former Prime Minister, Shri Atal Bihari Vajpayee added ‘Jai Vignan’ and the present Prime Minister, Shri Narendra Modi added ‘Jai Anusandhan’ to that slogan.

The Vice President said that Shastri Ji’s bold leadership changed the course of history and the international community, for the first time after Independence, saw glimpses of a new Bharat.

Congratulating Dr. Randeep Guleria on being conferred the prestigious Lal Bahadur Shastri National Award for Excellence, Shri Naidu said “I cannot think of a worthier recipient for this distinguished award instituted in the name of one of the greatest sons of India”.

He said, Dr. Randeep Guleria’s stellar role in creating awareness about the pandemic in recent times has not only been reassuring for all of us but has also soothed the frayed nerves of every person who has met, seen, or heard him speak on multiple forums on various aspects related to COVID 19. “We see in him the commander-in-chief of India’s dedicated army of frontline warriors who have been selflessly waging a tireless battle against Covid-19”, he added.

Shri Naidu also praised the doctors across the country and other frontline warriors, including nurses, technicians, security personnel, farmers and sanitation workers for their selfless service during the pandemic.

Shri Naidu said Dr. Randeep Guleria is widely respected for his ground-breaking work in his chosen field and is known to be a highly efficient and dedicated hospital administrator, as well. He lauded Dr. Guleria’s devotion to duty and in nurturing the Department of Pulmonary Medicine and Sleep Disorders in AIIMS.