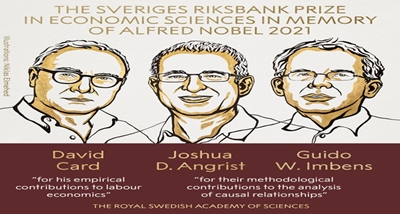 in International 9 days ago 0 51 Views

The Nobel committee said in a statement that the researchers were honoured for providing “new insights about the labour market” and showing “what conclusions about cause and effect can be drawn from natural experiments”.

Half of the prize went to Card, a professor at the University of California, Berkeley “for his empirical contributions to labour economics.” Card’s work has focused on labour market effects of minimum wages, immigration and education.

The other half went jointly to Angrist, a professor at the Massachusetts Institute of Technology (MIT), and Imbens, a professor at Stanford, “for their methodological contributions to the analysis of causal relationship.