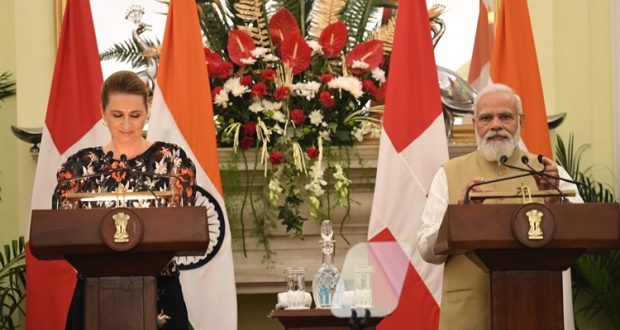 in International, National 11 days ago 0 47 Views

Newdelhi:9/10/21:Prime Minister Narendra Modi and his Danish counterpart Mette Frederiksen held bilateral talks in New Delhi. In his statement after the talks, Prime Minister Narendra Modi said, India and Denmark have continued their cooperation even during the pandemic. He said, in our virtual summit a year ago, both the countries had taken the historic decision of green strategic partnership.

Mr. Modi said it shows that both India and Denmark are dedicated towards the environment. He said, both the countries will work on several technologies in the sectors of food safety, cold chain, food processing, fertilizers, fisheries, aquaculture, and others. Mr. Modi said, both the countries have started a new partnership in the health sector. He said we have also decided to cooperate on agro-tech to increase agriculture productivity and improve farmers’ income.

The Prime Minister said India and Denmark will also coordinate in Smart Water Resource Management and Efficient Supply Chains sectors. He said it is a matter of happiness that Denmark has become a member of the International Solar Alliance. Mr. Modi said, it is a new dimension of the India-Denmark partnership. Mr. Modi said, during the meeting, both sides not only reviewed the progress made under this Partnership but also reiterated the commitment to increasing cooperation on climate change in the near future. The Prime Minister also expressed his gratitude to Denmark for the strong support, India has been receiving from it at various international fora. Mr. Modi also expressed his gratitude for the opportunity to host the next India-Nordic Summit, and for inviting him to visit Denmark.

India and Denmark inked four agreements and decided to expand cooperation. The agreement was signed in the field of Skill Development and Entrepreneurship, Traditional Knowledge Digital Library, establishing a Centre of Excellence towards natural refrigerants for tropical climates with potential applications and on mapping of groundwater resources and aquifers.