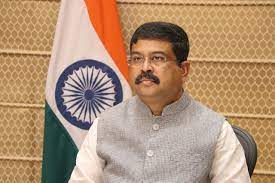 Newdelhi:9/10/21:Union Minister Dharmendra Pradhan has sought the personal intervention of the Odisha chief minister Naveen Patnaik for the expeditious implementation of PM-SVAMITVA scheme in the state. In his letter to Mr. Patnaik, the Union Minister has said that Prime Minister Narendra Modi launched the scheme in April last year as a reformative step towards the establishment of clear ownership of property in rural inhabited areas with the help of drone technology.

Stating that the PM-SVAMITVA Yojana provides records of rights to village household owners, Union Education Minister Mr. Pradhan has detailed out the multiple benefits of the scheme. Enumerating financial stability of rural citizens, determination of property tax, reduction of property-related disputes, creation of survey infrastructure for disaster management, and comprehensive village level planning as the key benefits of the scheme, Mr. Pradhan has requested the  Chief Minister, Mr. Patnaik, to intervene personally for the expeditious implementation of the scheme in Odisha, which could be of immense help in fighting poverty, ensuring a life of dignity for the poor, realising the vision of Gram Swaraj and over and above the building of an Aatmanirbhar Bharat.