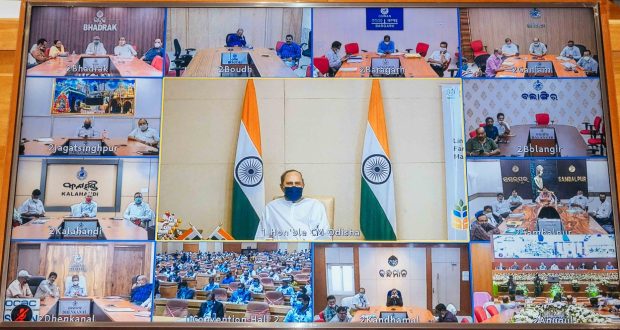 Bhubaneswar :8/10/21:: Chief Minister Shri Naveen Patnaik has stressed linking farmers directly to the market and removing intermediaries with the objective to improve the income of farmers.

Inaugurating the Odisha Agri Conclave 2021 on a virtual platform today, the Chief Minister said that the emphasis of the state government is to enhance the income of farmers. So we must respond to the dynamics of the market.  We need to streamline their connectivity to the aggregators and processors to play the role of producers.  We need to remove intermediaries who don’t add value to the supply chain, he added.

Stating that the State has a conducive policy environment, the chief minister said that we aspire to become the investment destination of choice by continuously creating and delivering outstanding opportunities for business growth, fostering all-around socio-economic development for the state and its people. Agri & allied sectors of the state are now open to National & Global players, he emphasised.

Stating that the Agri Conclave 2021 has been organized to link farmers of Odisha to organised national market, the chief minister invited the top agri-business leaders to be partners in scripting the growth story of Agribusiness in Odisha.

He said that farmers lay the foundation of a nation’s economy. It is on this foundation, we build the pillars of a vibrant economy. The development of agriculture and the empowerment of farmers is his priority. Shri Patnaik expressed happiness over the presence of Leading Private Sector Players in the Agribusiness Sector from across India in this Conclave 2021.

He further said that our farmer-focused approach backed by various schemes and programs has started to yield results. There is considered evidence of a local surplus of agriculture and horticulture produce. We can work with agri players to work in tandem so that appropriate pre-harvest and post-harvest protocols are followed by the farming community, he advised.

The chief minister stressed that the farmers of the state should use advanced technology.

Citing challenges of frequent natural calamities including droughts, cyclones, and floods, he said that his Government has worked out all possible measures to ensure uninterrupted growth of the Agriculture and the Economy of the state. It is now evident that Agri-sector is a silver lining in the current Covid-19 pandemic situation, he added.

Describing Odisha s success the CM said that Odisha has attained self-sufficiency in food production, and Odisha is now the third-largest contributor to the nation’s Public Distribution System.

Highlighting Odisha’s advantage in agriculture, he said that we are one of the leading producers of cereals including millets, vegetables, fruits, spices, fish, seafood, and poultry products. Some of the key products that is available for value addition are  Seafood, Cashew-nut, Organic millets, Turmeric, Coffee, Black pepper, Mango, Jackfruit, Sweet Potato, Tamarind, Honey, etc.  Today, Kandhamal Turmeric, Similipal Honey, Koraput Coffee have created their own brand values across the globe for their exceptional qualities, he added.

Speaking on the state’s policy framework for various sectors, he said that we have introduced a separate Agriculture budget for the state and have a robust State Agriculture Policy 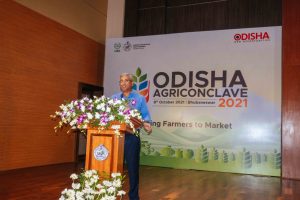 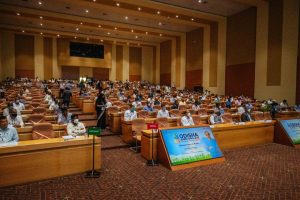 Speaking on the occasion, Minister for Agriculture & Farmers’ Empowerment Shri Arun Sahoo said Odisha is a pioneer in promoting agriculture enterprises through ease of doing business.  Mukhya Mantri Krushi Udyog Yojana has been a great support to farm sector business, he added. He outlined the advantages of Schemes like Kalia, Balaram Yojana for the farmers. He praised the vision of the Chief Minister for the income growth of farmers in the state.

Odisha Agri Conclave 2021 is a joint endeavor of the State Agriculture & farmers’ Empowerment Dept and the National National Agricultural Cooperative Marketing Federation of India to make the process of farming easier for farmers. The initiative has helped in providing State’s traditional, indigenous and nutritious products support to get prominence in the global market.

The Chief Minister released two books on agriculture on the occasion.

Adani-Wilmer ltd, Tata Agri, Parley, Amul, Coffe Board of India, Big Basket, and many other top national and global players participated in the conclave.

2021-10-08
Editor in chief
Previous: Odisha Agri-Conclave 2021 will kick off tomorrow at the new Convention Hall at Lokseba Bhawan.
Next: PM congratulates H.E. Fumio Kishida for assuming charge as PM of Japan