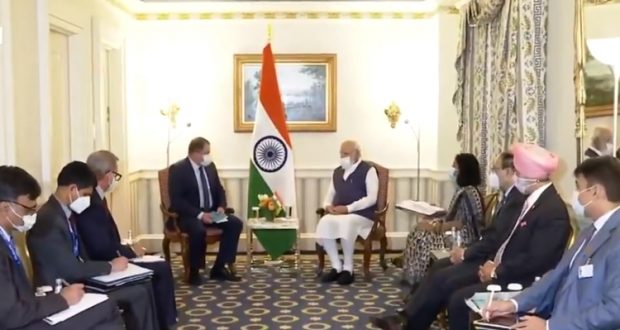 Washington DC:23/9/21:  Prime Minister Narendra Modi is presently meeting top Chief Executive Officers of big multinationals of United States. The series of meetings began a short while ago.  AIR correspondent reports that the CEOs meeting with the Prime Minister is one of its kind. Each meeting will last for 20 minutes with a five minute briefing and 15 minutes’ interaction. In all, there are five CEOs from diverse fields. The focus will be on Make in India and enhancing trade and investment opportunities between the two countries.

Prime Minister Narendra Modi met Mr. Cristiano Amon, Chief Executive Officer of Qualcomm a short while ago. During the meeting, they discussed investment opportunities offered in India’s telecommunications and electronics sector. These included the recently launched Production Linked Incentive Scheme (PLI) for Electronics System Design and Manufacturing (ESDM) as well as developments in the semiconductor supply chain in India. Strategies for building the local innovation ecosystem in India were also discussed.

Prime Minister highlighted the vast opportunities India offers. Mr. Amon expressed keenness to work with India in areas such as 5G and other digital India efforts.

After him, Prime Minister also met President and CEO of Adobe Shantanu Narayen. They discussed Adobe’s ongoing collaboration and future investment plans in India. Discussions also focused on India’s flagship programme Digital India and use of emerging technologies in sectors like health, education and R&D.

Mr Modi will hold talks with First Solar CEO Mark Widman. First Solar is a solar panel manufacturer as well as a producer of utility-scale PV power plants and related services. U.S. Technology Companies to Benefit from India’s Solar PV Module Production Linked Incentive (PLI) Scheme. The diversity in the meetings can be assessed from the fact that there are investment bankers as well. Prime Minister will meet Blackstone CEO Stepehn A. Schwarzman. Blackstone is a New York-based American alternative investment management firm.

India is looking to boost exports through trade relationships. In 2019, overall U.S.-India bilateral trade in goods and services reached 149 billion US dollar. U.S. energy exports are an important area of growth in the trade relationship.