Top Headlines
Home » State News » Odisha is on its path towards self-sufficiency in vegetable and fruit production. 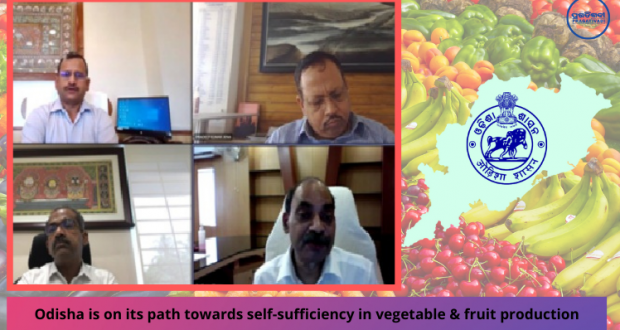 Bhubaneswar23/9/21:: After becoming a surplus state in rice, milk, poultry, and fish fingerling production, Odisha is on its path towards self-sufficiency in vegetable and fruit production.

This was discussed in a high-level meeting held under the Chairmanship of Chief Secretary Suresh Chandra Mahapatra on digital mode from Lok Seva Bhawan wherein Secretary Agriculture and Farmers’ Empowerment Suresh Kumar Basistha outlined the present scenario and available potential of vegetable and fruit production in the State for discussion.

Considering different dimensions of the proposal, Chief Secretary Suresh Mahapatra directed to prepare a target-specific time-bound work plan for up-scaling the fruit and vegetable production in the context of different agro-climatic zones of Odisha. Mahapatra also directed to list out those species and verities for which Odisha has higher potential. Department was asked to prepare a well-knitted workable plan with inputs from the experts, farmers, and agri-entrepreneurs. Development Commissioner Pardeep Kumar Jena advised to focus on the vegetables like cauliflower, cabbage, tomato, potato, and onion; and, the fruit species like papaya, banana, guava, and lemon.

Director Horticulture Rohit Kumar Lenka appraised that because of the continuous promotional interventions, Odisha ranked first in the production of sweet potato, second in brinjal, fifth in watermelon, cauliflower, okra, tomato, and, sixth in bottle gourd at the national level as per ‘horticulture area production information system’ (HAPIS) reports 2019-20. Similarly, in the fruit production category,  Odisha ranked second in jackfruit,  fifth in lemon, seventh in sapota, ninth in mango, and ninth in jackfruit. In the production of spices, Odisha ranked sixth in coriander, seventh in chili, seventh in turmeric, and eighth in garlic as per the reports of 2019-20.

2021-09-23
Editor in chief
Previous: Science Centre and Planetarium will come up in Balangir with a project cost of Rs 21.5 crore
Next: Bhubaneswar Municipal Corporation issued a set of guidelines to be strictly followed for organising Durga Puja