This book is about the journey of two of the most eminent personalities of the Odia  Film  Industry.  It brings to the fore their rise to the top as an actor,  producer, and director and highlights their trials and tribulations at a time when the industry was in its fledgling stage.

They embarked upon their passion at a very young age,  as stage artists and worked their way up. From acting to producing to directing films, Gour & Parbati did it all, with total sincerity and honesty.

Romancing   the   movies   was  what   brought   Gour   Prasad   Ghose   & Parbati  Ghose together.   Their romance blossomed as the  Odia  Film Industry bloomed.  The path was not easy but their love for cinema and people’s appreciation of their work inspired them ever on.

They set their own trend of presenting social issues to the public through artistic narrations while consistently introducing established and new talents into the magical world of cinema.

The duo’s illustrious career was crowned with many awards and accolades.   At the peak of their stardom,  they made  Odisha proud by bringing home the   National    Award for   Regional    Films for three consecutive movies.With the passage of time,   they ventured into television and documentaries for organizations that aided to propagate prevalent social messaage. 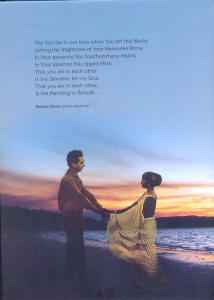 The notion of this book germinated from the desire to archive and substantiate their outstanding voyage.  It is also aimed to inspire and motivate new upcoming talents,  especially in the Odia  Film Industry, with stories of the duo’s creative achievements and focused determination. Colleagues and veterans of this industry can relate to the depicted facts and the plethora of information will familiarise the younger generations who are not aware of their work.

Daughter   Ratri   Ghose   Barman has been able to execute her vision of the  Book with total  support from  husband   Shekhar    Barman and aunt  Khirod   Naik.  They have made an earnest effort to document accurate information.  This  book would have been impossible  without  the unconditional   financial   support  of grand-daughter   Pavlina   Ghose   and her husband  Chris  Campo..A book which  gives a glimpse  into their humble  beginnings  and meticulously chronicles  their entire career ,which  canvases  their passion for Cinema  and depicts  their dedication  and determination   and portrays  their respect for Odia Art & Culture .

A book which  encompasses   their constant  effort to merge Odia Literature  into the creative world of Cinema.

With sheer talent and hard work, they had slowly but surely  built and secured their own niche in the Odia Film Industry  and constantly  endeav~ured  to bring known and unknown  talents  into this magical world

The entire gamut   of their. career has been conveyed with full attention to details to make you experience the   magic    of Gour  Prasad  Ghose  & Parbati  Ghose through these pages.