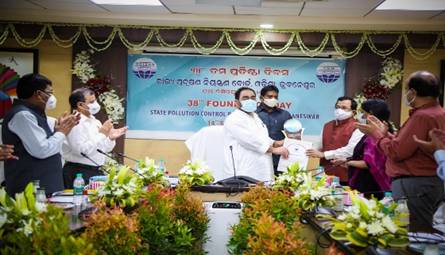 Bhubaneswar:17/9/21:Union Minister of Coal, Mines and Parliamentary Affairs Shri Pralhad Joshi has congratulated National Aluminium Company Ltd (NALCO)’sPanchpatmali Bauxite Mine under the Ministry of Mines, for winning the prestigious Pollution Control Excellence Award 2021 of the State pollution control Board, Odisha. In a tweet, the Minister has said that the award is the recognition of the Company’s sustained efforts towards protection of the environment.

In a function held yesterday at State Pollution Control Board in Bhubaneswar, ShriBikram KeshariArukha, Minister of Forest & Environment and Parliamentary Affairs, Govt. of Odisha handed over the Award to the mines team of national Aluminium Company Ltd (NALCO) for effective pollution control measures and sound environmental management practices. 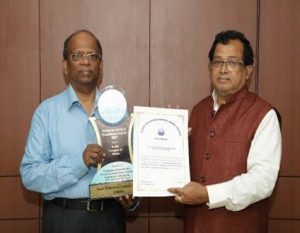 As part of the AzadiKaAmritMahotsav (AKAM) to commemorate 75 years of Independence, NALCO has been undertaking a massive plantation drive across its Production Units in Koraput and Angul in Odisha. As a responsible Corporate organization, NALCO has always taken utmost care of the environment. As part of AzadiKaAmritMahotsav celebrations, NALCO has recently distributed large number of saplings to the villagers of Kutudi, Mundagadati, Upergadati&Talagadati near its Mines & refinery Plant in Damanjodi, Odisha.

Starting from implementing zero discharge system for effluent, NALCO’s BauxiteMine has adopted concurrent reclamation and rehabilitation of mined-out areas. ThePanchpatmali Bauxite Mine has planted more than 37 lakh trees so far. Steps have alsobeen taken to improve biodiversity in the mined out areas.

2021-09-17
Editor in chief
Previous: Phase 2 of Visvesvaraya PhD Scheme launched by IT Minister
Next: Railways to provide entry level training in industry relevant skills through 75 Railway training institutes across the country