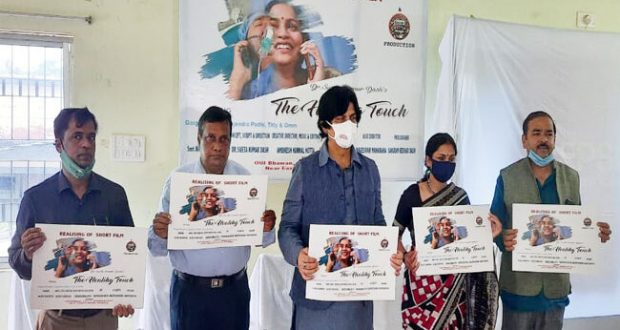 Bhubaneswar:17/9/21:The 7-minute  short film Healing Touch’produced by  Social Image Production, Bhubaneswar was released today in a press met. Rajyasabha MP and actor Muna khan grace the event as chief Guest Lead . Actress Gargi Mohanty and Gajendra Padi were in dais with director DR.Sweta Kumar Dash. Dr. Dash has produced five films including his upcoming Bollywood feature film” Delhi Bus “ on Nirvaya Rape Case of Delhi. Besides he has produced the short film “ Sani” which is based on the river Mahanadi and the livelihood of fishermen in Odisha . This film also facilitated the in-state film award as the best short film. “MASK” is a short film that has won many international and national awards and recognition.

This short film ‘The Healing Touch’ delivers a big message on the Covid pandemic. It has already ruined millions. A huge chunk has been affected and lakhs have lost lives. Every nation has been trying to combat the disease for which it is indispensable to be conscious physically and mentally strong and healthy. Covid patients undergoing treatment are having panic attacks leading to acute mental depression with unexplained fearfulness, nervous breakdown, anxious thoughts which is more debilitating than the infection itself at the physical level