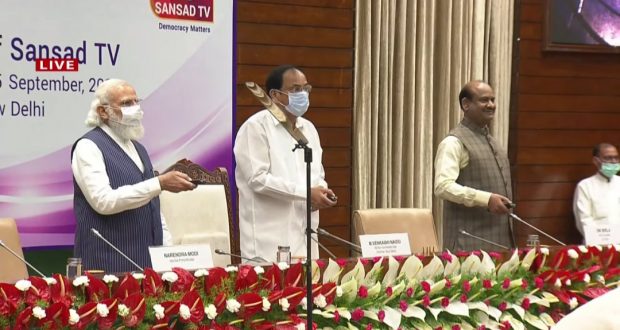 Addressing the event, the Prime Minister lauded the transformation of the channel associated with the Parliament in accordance with rapidly changing times, especially when the 21st century is bringing revolution through dialogue and communication.  The Prime Minister termed the launch of Sansad TV a new chapter in the story of Indian democracy as, in the form of Sansad TV, the country is getting a medium of communication and dialogue which will become a new voice of the nation’s democracy and people’s representative. The Prime Minister also greeted Doordarshan for completing 62 years of its existence. He also greeted all the engineers on the occasion of Engineer’s day

The Prime Minister highlighted the role of the media in the context of 75 years of independence when both glories of the past and promises of the future are before us. He said when the media takes up issues like Swachh Bharat Abhiyan, that reaches the people with great speed. He suggested that the media can play a role in disseminating the efforts of the people during Azadi ka Amrit Mahotsav by planning 75 episodes on the freedom struggle or bringing out special supplements to mark the occasion.

Talking about the centrality of content, the Prime Minister said while it is said that ‘content is king, in his experience “Content is Connect.” He explained that, when one has better content, people automatically engage with it. As much as this applies to the media, it is equally applicable to our parliamentary system as there is not only politics in Parliament, there is also policy. He emphasized that common people should feel a connection with the proceedings of the Parliament. He asked the new channel to work in that direction.

The Prime Minister said when the Parliament is in session, debates are held on diverse subjects, so there is so much for the youth to learn. Members of Parliament also get inspiration for better conduct, better debate inside the Parliament when the country watches them. He also stressed the need to focus on the duties of the citizens and said that the media is an effective medium for this awareness. The Prime Minister noted that from these programs, our youth will get to learn a lot about our democratic institutions, their functioning as well as civic duties. Similarly, there will be a lot of information about working committees, the importance of legislative work, and the working of legislatures which will help in understanding the democracy of India in depth. He wished that programs will also be made on Panchayats working as grassroots democracy in Parliament TV. These programs will give new energy, a new consciousness to the democracy of India.