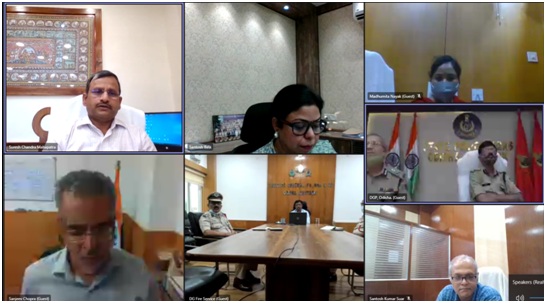 Bhubaneswar15/9/21:: As another outcome of the application of 5-T principles in citizen-centric Governance, the Unified Emergency Call No-112  has been functionalized in Odisha.

Looking into readiness of the system, the Chief Secretary directed to make emergency response system full proof with least response time. He emphasized minimizing the response time between the receipt of a call and reaching the vehicle at the service delivery point. In the first stage, the emergency call numbers 100 and 101 of police and fire service have been integrated with the unified number 112. Chief Secretary directed the home department to undertake continuous and extensive awareness activities about the new unified number so that people could make use of the system.

The issues relating to integration of 108 ambulance services with the new number were discussed in the meeting. Chief Secretary directed to be extra careful regarding service delivery during the process of transition from 108 to 112.

Director of National Health Mission Mrs. Shalini Pandit appraised that on average around 30,000 calls per day were being received through 108 out of which more than 20,000 calls related to ambulance service only.

Considering the importance of the ambulance service at critical hours of life, the Chief Secretary directed to make the new system fully equipped both in terms of technology, manpower, and real-time location monitoring of the ambulances. He further directed to appropriately train the personnel at a call center for handling 108 calls and proving immediate service to the people.  With the stabilization of the new unified system, emergency helpline numbers of other departments would be integrated with it in phases.

Additional Chief Secretary Sanjeev Chopra appraised that the State emergency response center (SERC) is now functioning round the clock with 124 call-takers with computers aided digitized systems and 551 vehicles for providing services. In the month of August 2021, a total number of 8708 calls were registered in the call center out of which 7957 related to police services 585, related to fire services, and 166 calls were provided services through the call center itself. Besides, 1915 calls were forwarded to ambulance services. It was decided that more vehicles would be hired for providing immediate emergency services to the people.