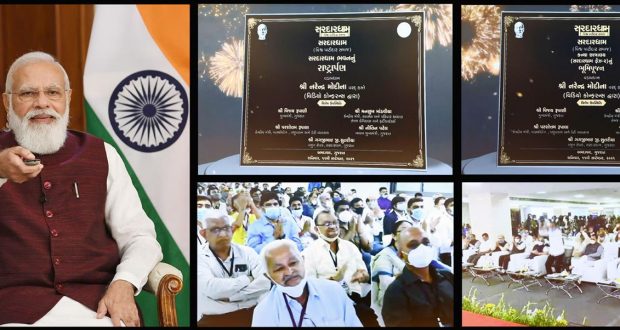 When big economies were in defensive mode India was reforming: PM

The Prime Minister expressed happiness that the commencement of Sardar Dham Bhawan is happening on the occasion of Ganeshotsav. He wished everyone for Ganesh Chaturthi, Ganeshotsav and Rishi Panchami and kshamavani Divas. He lauded all the members associated with Sardar Dham Trust for their dedication to the service of humanity. He admired their emphasis on the empowerment of the youth of the Patidar society as well as the poor and especially women.

Addressing the event, the Prime Minister said the Hostel facility being inaugurated today will also help so many girls to come forward. He said that the state of the art building, girls hostel and modern library will empower the youth. The Entrepreneurship Development Centre  will enrich the strong business identity of Gujarat and the Civil Service Centre will give new direction to the youth interested in careers in civil, defence and judicial services. He said that Sardar Dham will not only become an establishment for building the future of the country, but also inspire the future generations to live the ideals of Sardar Saheb.

He remarked today, September 11th, is a date in the history of the world that is known to have struck humanity. But this date also taught a lot to the whole world! A century ago it was on September 11, 1893, when the World Parliament of Religions was held in Chicago. He added that on this day, Swami Vivekananda stood on that global stage and introduced the world to the human values ​​of India. Today the world is realizing that tragedies like 9/11 will have a permanent solution, only through these humanitarian values.

The Prime Minister said that today September 11th is another big occasion – the 100th death anniversary of India’s great scholar, philosopher and freedom fighter ‘Subramania Bharati’. The philosophy of Ek Bharat Shreshtha Bharat envisioned by Sardar Saheb has been shining with full divinity in the Tamil writings of Mahakavi Bharati. He noted that Subramania Bharati drew inspiration from Swami Vivekananda and was influenced by Sri Aurobindo. Bharati gave a new direction to his thoughts and new energy while living in Kashi. The Prime Minister announced the establishment of a chair in the name of ‘Subramania Bharati ji in Banaras Hindu University. He said the ‘Subramania Bharati Chair’ on Tamil Studies would be established in the Faculty of Arts of BHU. Th e Prime Minister added that Subramania Bharti ji always laid special emphasis on the unity of mankind and the unity of India. His ideals are an integral part of India’s thought and philosophy.

2021-09-11
Editor in chief
Previous: e-SHRAM will be a game-changer for the informal sector : Sh. Bhupender Yadav
Next: If we have to achieve the inclusive ideals of our constitution, then the role of women in the judiciary also has to be increased: President Kovind

PM dedicates to the Nation 35 crop varieties with special traits

Bhubaneswar28/9/21:: The Appointments Committee of the Union Cabinet has appointed Polamraju Lakshmi Haranadh, IRTS (1994) as the new Chairman of the Paradip Port Trust. The appointment has been done for ...