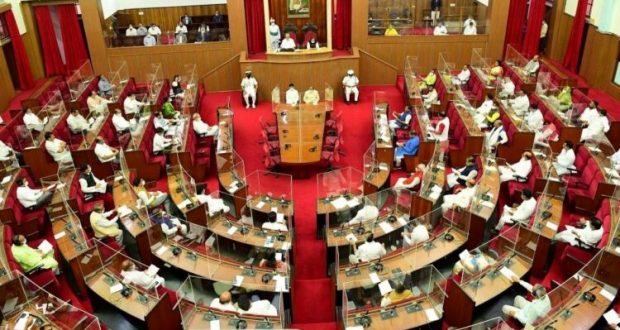 As soon as the House assembled for the day, BJP legislators created an uproar protesting against mining scam and yesterday’s suicidal death of a protester, Dushmant Das, in front of the Assembly. The saffron party MLAs also raised the demand for arrest BJD MLA Prashant Jagdev, who was suspended from the ruling party yesterday for anti-party activities.

“Though we moved an adjournment motion demanding discussion on mining scam, the Speaker rejected it under the influence of the ruling party. The state is not getting much revenue due to illegal activities by mining Mafia. The Government is only shedding crocodile tears by raising farmer issues to avoid discussions on mining scam worth Rs 2 lakh crore,” he stated.

He further alleged that the Government has failed to maintain law and order in the state. BJD MLA Prashant Jagdev took law into his hands by thrashing a BJP worker and this shows the real face of the ruling party, Majhi said demanding immediate arrest of the suspended MLA.

Congress MLAs also joined the bandwagon and raised anti-Government slogans over mining issue. Congress Legislature Party (CLP) leader Naransingha Mishra said the police administration has failed to discharge its duty as it could not save the life of the youth, who attempted suicide in front of the House yesterday and later died while undergoing treatment at the hospital.

“We had raised the issue of frequent suicide attempts in front of the House during the  previous sessions. Chief Minister and concern department Minister are answerable for this unfortunate incident,” he stated.

Meanwhile, ruling party MLAs staged demonstration under the statue of Mahatma Gandhi protesting over farmer issues and demanding implementation of Swaminathan Commission report. They also demanded that the Centre supply fertilizers to the state and increase the Minimum Support Price (MSP).