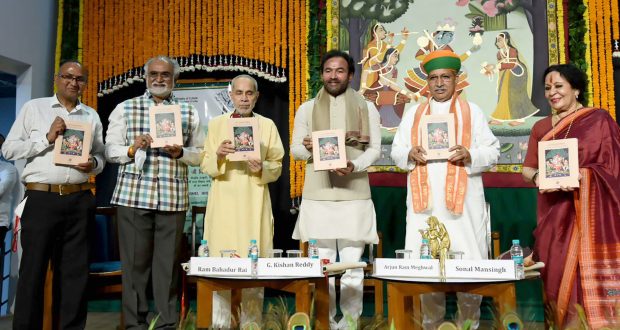 The book “Gita Govinda :Jaydeva’s Divine Odyssey” by Dr.Utpal K. Banerjee , along with an exhibition on “Gita Govinda” also launched

The programme ‘BujurgonkiBaat–DeshKeSaath’ aims at enhancing the interaction between the youth and the elder persons who are 95 years and above and thus have spent around 18 years in India before independence. The video of the interaction should preferably be kept below 60 seconds and can be uploaded at www.rashtragaan.in .

The exhibition showcases collection of paintings on the theme of Krishna from various schools of art including Amber, Kangra among others.

Launching the programme ‘BujurgonkiBaat–DeshKeSaath’ ShKishanReddy said “India is a nation of the young that is always willing to learn from its elders. Be it the guru-shishyaparampara, the role of family, or elders at work, Indians have always looked up to their elders. Therefore, it gives me great pleasure to launch the programme “Bujurgonkebaat – DeshKeSaath”

He further added that this is a unique programme where the Country’s youth will spend time and interact with the older generation and elders close to 95 years or above. They will then upload these videos and the ministry of culture will integrate them. This is a great way to involve our Elders in AzadiKaAmriMahostav. 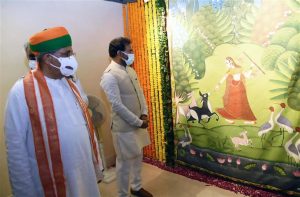 Speaking on the occasion of the launch of the book GeetGovinda Sh. G. K Reddy said “It gives me great pleasure to launch the book GeetaGovindam – a Divine Odyssey by one of our elders and Padma Shri awardee Shri UtpalBanerjee. I have been told that this is the first-ever fully-rhymed translation of the great 12th century poet Jayadeva”

He further added that in our own cultures GeetaGovindam has stood the test of time through chanting, recitation, traditional music, classical dance, miniature painting and intricate sculpture. However, by translating to English we are doing a great service to our own culture and heritage

ThrMinister also highlighted the fact that our cultures and traditions will flourish only if we share it with the world. Therefore, he is pleased to be launching this translation, the Minister added. Jayadeva’s Krishna and Radha are gods in the form of humans, who show human emotions.Only a person rooted in India’s culture and philosophy would have been able to do justice to the translation, the Minister said.