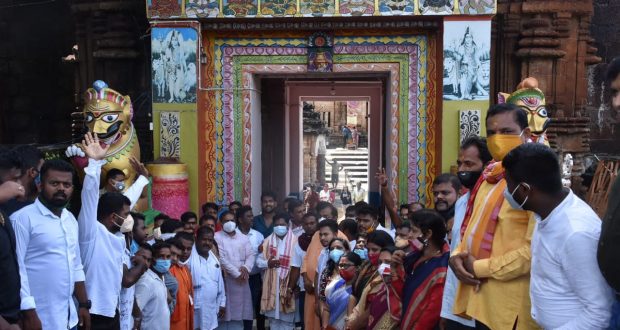 Bhubaneswar:6/9/21:Union Minister of State in the Ministry of Jal Shakti and Tribal Affairs, Bisweswar Tudu on Monday assured that all the disputes pertaining to rivers in Odisha will be resolved soon.

The minister made the announcement on the sidelines of his visit to the Lord Lingaraj Temple in Bhubaneswar earlier in the day.

He said that he has already held discussions over the issues related to rivers in Odisha with the concerned officials after he took charge of the Ministry two months back.

A Detailed Project Report (DPR) will be prepared and the issues will hopefully be resolved at the earliest, he said speaking to the media.

Speaking about the Odisha’s dispute with Chhattishgarh over the distribution of Mahanadi River water, Tudu said, “There is nothing which cannot be resolved amicably. Both the States should have made some sacrifices to come to a mutually acceptable agreement. But it was allowed to linger as nobody really tried to lower their ego.” 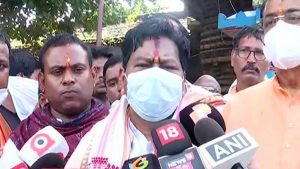 Following widespread political and public outcry, the Odisha Government had moved the Supreme Court in 2016 seeking a direction to Chhattisgarh to stop construction of all barrages and dams in the upstream of the Mahanadi River. It had also sought the formation of a tribunal to resolve the issue.

In January 2018, the Apex Court had directed the Centre to form a tribunal to settle the inter-state water dispute.

Speaking on tribal affairs, the Union Minister said, “The Centre gives regular funds to all States for the development of the tribal population. However, it is the duty of the concerned State Governments to make use that fund on the ground.”

Tudu was accorded a grand welcome at the Bhubaneswar airport following his arrival today. He was received with the traditional music and folk dance performance. After seeking the blessings of Lord Lingaraj in Bhubaneswar he was scheduled to visit Puri and thereafter travel to his constituency in Mayurbhanj to join BJP’s Jan Ashirvad Yatra.

2021-09-06
Editor in chief
Previous: A Poverty-Stricken Fan Mechanic made the entire nation proud by clinching a Gold medal in Tokyo Paralympics 2020
Next: Jagdish Kanungo and Jayanta Behera have been selected to receive Ila–Bansidhar Panda Kala Samman