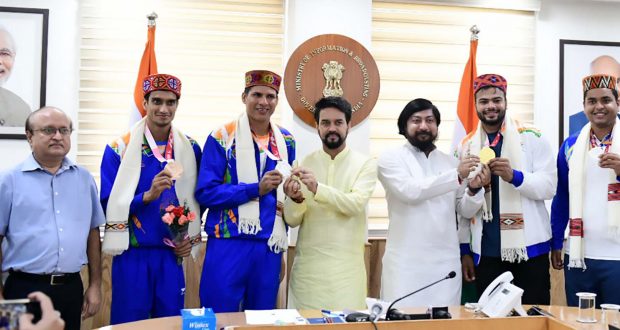 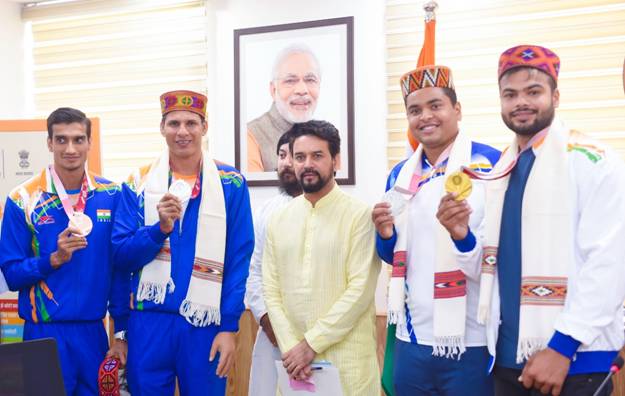 Speaking on the occasion Shri Thakur said, “India is ecstatic at the brilliant performance of our Paralympians; we’ve already equaled the Paralympics medal tally vis-vis all the previous Paralympics! Paralympians are India’s pride.The outstanding performance of Indian Para-athletes has not only made the country proud but has also given courage that every dream can be achieved. In the Tokyo Paralympics, India had sent the largest contingent so far and this team has performed the best ever and has taken the number of medals into double digits. These para-athletes are an inspiration for everyone today. The way Prime Minister Shri Narendra Modi has taken interest in sports and motivated athletes, it has inspired our players to give their best. I once again congratulate SumitAntil, Devendra Jhajharia, Yogesh Kathuniya and Sharad Kumar for their brilliant performance.”Sumit has not only won the gold in Javelin Throw but also created world record. Devendra grabbed silver medal, with a personal best throw of 64.35. This was his third medal at Paralympic Games. Yogesh Kathuniya won silver medal in Discus Throw and Sharad Kumar won the bronze medal in men’s high jump. They all have become role models for millions, the Minister added. 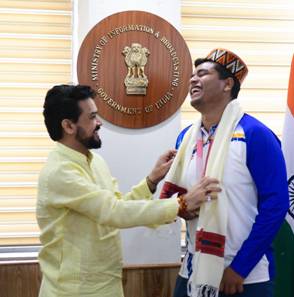 He further elaborated that the government approach in extending support to athletes for international competitions has undergone a transformational change.The government will continue to support India’s Paralympians with facilities and funding so that they may continue to excel internationally.Target Olympic Podium Scheme (TOPS) will be taken forward and further strengthened to extend greater support to athletes under the scheme, the Minister disclosed. Shri Thakur added that there could not be a greater tributeto Major Dhyan Chand that our para-athletes won four medals on the National Sports Day. He further said that the extraordinary performance of India by winning the 1983cricket World Cup has changed the entire approachtowards sportsand boosted confidence and morale of athletes across various sportingdisciplines. On Avani’sperformance,Shri Thakur said that winning two medals in one Olympic is remarkable and the whole Nation is proud of her.

During their interaction, the para-athletes said it is unprecedented that the Prime Minister of the country has taken such personal interest in interacting with and inspiring the athletes. The athletes felt that it was due to the motivation by the Prime Minister that the confidence of the athletes was of an entirely different level this time. Due to financial support and facilities extended to them, the athletes felt that the Government has adopted and supported them which gave a tremendous boost to their morale.