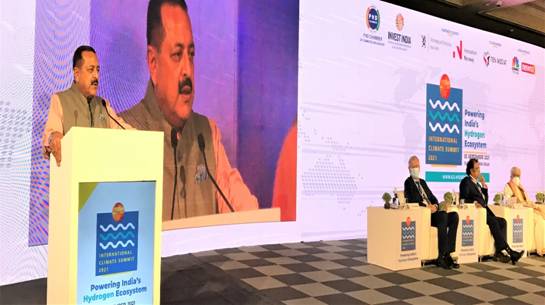 India has the potential to become Global Green Hydrogen Hub in near future:Dr Jitendra Singh

Dr Jitendra Singh said, India’s energy demand is likely to see exponential growth, but at the same time India’s share of Renewable Energy (RE) is expected to reach at least 50% by 2050. He, however, added that Renewable Energy can help abatement of only 45-50% CO2 emission and Green hydrogen is most suitable for mitigating greenhouse gas (GHG) emissions.

In his address, Shri Sanjay Gupta, President PHD Chamber of Commerce and Industry said that enabling a regulatory framework will give a boost to the Make in India initiative in developing India’s Hydrogen Ecosystem.

Dr J. P. Gupta, Summit Chair and Chairman, Environment Committee, PHDCCI said in his address that India is uniquely placed to produce hydrogen not only for its own needs, but it could well become a global export hub.