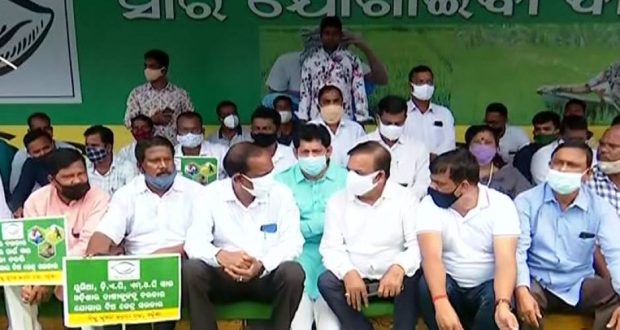 in Smartcity Bhubaneswar 24 days ago 0 66 Views

Bhubaneswar:1/9/21:Alleging short supply of urea to Odisha by the Centre, the ruling Biju Janata Dal (BJD) leaders and workers of Biju Krushaka Janata Dal staged a protest at Power House square in Bhubaneswar on Wednesday.

Coming down heavily on Centre, senior BJD leader Sanjay Kumar Das Burma said, “This year, farmers across Odisha have cultivated across 61.96 lakh hectares of land. The centre along with the State government had agreed upon an action plan for ensuring an adequate supply of urea to the farmers. There is a time parameter for supplying urea and DAP to the farmers but the centre has failed to deliver the same.”

“This is Kharif season and farmers across the State are sweating hard on their agricultural lands. It is a matter of concern and unfortunate that the centre is not working according to the agreed action plan and has miserably failed to provide fertilisers to them,” he further added.

Meanwhile, refuting the allegations, State’s BJP Krushak Morcha President Pradip Purohit said, “Centre has supplied adequate quantity of urea fertilisers to Odisha. However, the ruling government has miserably failed to monitor the stock. The stock is stalled at different depots which the government is yet to distribute.”

He further said that over 2 lakh metric ton of urea is provided by the centre to the state. It is the responsibility of the state government to distribute the stock to Seba Cooperative Societies, However, the government has delivered those to their dealers.