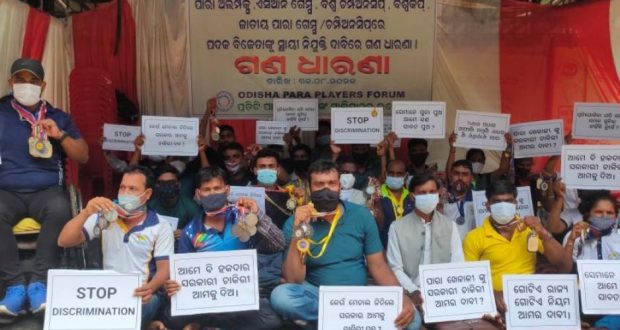 in Smartcity Bhubaneswar 25 days ago 0 72 Views

Bhubaneswar:31/8/21:Members of the Odisha Para Players’ Forum (OPPF) today resorted to a peaceful demonstration in front of the State Sports and Youth Services Department office alleging apathy and discrimination by the government. They demanded regular government jobs and amenities on par with other sportspersons in the State.

“We have brought laurels for the State and country by winning many national and international medals. At present, para-badminton player Pramod Bhagat from Odisha is the number one player in the world and clearly a favorite to win medals in the ongoing Tokyo Games. However, the State government is showing us step-motherly attitude and sitting on our demands for direct requirement scheme for the para-players,” said OPPF Secretary Rakhel Kumar Sethy.

According to reports, in 2012, the Odisha government had come out with a notice to provide facilities to para-players at par with other athletes in the State. In 2016 the government decided to provide direct category jobs to the players winning medals in various National, International, Asian, World Championship, and Olympics competitions.

“Unfortunately, the notification didn’t have any mention about the para-athletes and they are deprived of government jobs on the back of their solid performances. Despite several reminders, the government is not considering our legitimate demand,” lamented OPPF Joint Secretary Sunil Pradhan.

Earlier in 2019, the para-players had staged a dharna and the State government had assured to include them in the direct requirement scheme. Two years have passed but the file is gathering dust in the Sports Department.

Chief Minister Naveen Patnaik had also announced on June 6, 2021, to provide medal-winning para-players government jobs. But the assurance has not yet materialised and the department officials are of the opinion that the guidelines need to be changed to provide para-athletes jobs under the scheme.

“The State government is dilly-dallying over our legitimate demand since the last nine years and only giving us false assurances. We will continue our strike till our demands are met,” said Sethy.