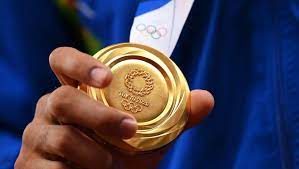 Devendra Jhajharia grabbed Silver with a personal best throw of 64.35. This was also his third medal at Paralympic Games. Sundar captured bronze with a season-best throw of 62.58.

The President, the Vice President and the Prime Minister have congratulated Sumit Antil on winning Gold Medal in the javelin throw at the Tokyo Paralympics.

In a tweet, President Ram Nath Kovind said, Sumit Antil’s historic performance in javelin throw is a moment of great pride for the country. Mr Kovind said, every Indian is elated to hear the national anthem at the podium.

Vice President M. Venkaiah Naidu said India is on a medal-winning spree on Monday. He said Indian Paralympians have made the entire nation proud.

Prime Minister Narendra Modi said Indian athletes continue to shine at the Paralympics. He telephoned Sumit Antil and congratulated him for a historic performance. The Prime Minister told him that he made the nation proud and youngsters would be inspired by him.

Youth Affairs, Sports and Information and Broadcasting Minster Anurga Thakur posted the emotional video of Sumit while talking to the Prime Minister.

The Prime Minister has congratulated Devendra Jhajharia on winning Silver medal in Javeline throw at Paralympics. The Prime Minister also had a telephonic conversation with him. He acknowledged Devendra’s rich efforts and said since he hails from the land of Great Maharana Pratap he excels in javelin throw. Devendra dedicated his medal to his family members for their support.