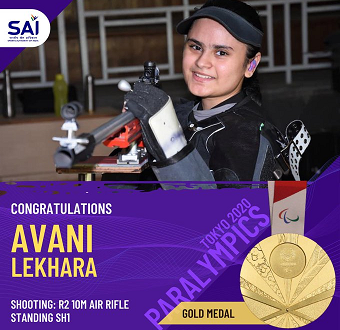 Earlier, Avani who works as an Assistant Conservator of Forests in Rajasthan and trains at the JDA Shooting Range in Jaipur, shot 621.7 points to finish seventh in qualification and secure a place in the final. She has been wheelchair-bound since a road accident in 2012. The school topper believes life is not about holding good cards but playing well with those one holds.

Since 2017, Government has supported Avani by including her in the Target Olympic Podium Scheme (TOPS) besides funding her training through the Annual Calendar for Training and Competition (ACTC). Thanks to such support, she has competed in 12 international competitions, attended National Coaching Camps with sports science support along with a sports kit. She also got financial assistance to install a computerized digital target at home, Air Rifle, ammunition, and accessories.