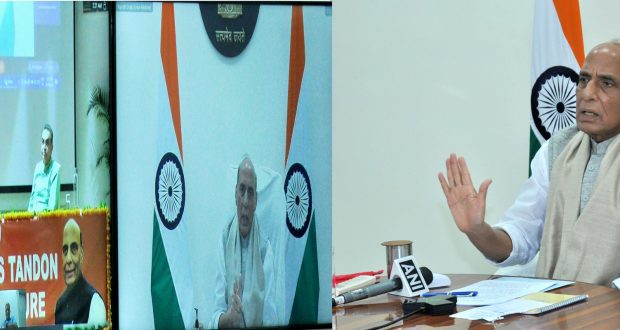 Newdelhi:30/8/21;Raksha Mantri Shri Rajnath Singh delivered a lecture on ‘National Security’ as part of late Balramji Das Tandon lecture series through video conferencing on August 30, 2021. The Raksha Mantri defined national security as a strong belief to remain vigilant and prepared to deal with every threat &challenge that endangers the existence, development, and interests of the Nation, stressing that being sensitive towards national security is the topmost priority of every Government.

Shri Rajnath Singh recalled the challenges by India on its land and maritime boundaries in the last 75 years and lauded the Armed Forces for facing & overcoming every challenge that threatened national security. “Ever since Independence, there has been a constant attempt by some anti-India forces to create an atmosphere of instability within the country. When they realised that they cannot fight with us in front-wars, they resorted to a proxy war. They began to train and finance terrorists to target India,” he said.

Shri Rajnath Singh termed “increased morale of the security forces and their changed modus operandi” as a major change in the response against terrorism in the last seven years. Stressing that the Government does not believe in politicising issues related to national security, he said there is now a belief in the Armed Forces that they can perform their duty in the service of the nation with no interference of any kind. “There hasn’t been a major terrorist incident in the hinterland of India in the last seven years. This shows the increased morale and confidence of our Armed Forces,” he said.

Referring to the cross-border strikes on terror camps, the Raksha Mantri said there will be no comprised on national security. He said the model of terrorism adopted by the evil forces is slowly collapsing. “The anti-India forces have understood that they are no longer in a position to do much in the Kashmir Valley, especially after the abrogation of Article 370. I want to assure you that no power in the world can separate Jammu &Kashmir from India,” he stated.

On ceasefire violations, Shri Rajnath Singh said the Armed Forces have always given a befitting reply that shows their alertness and bravery. He assured the Nation that the Armed Forces are vigilant at all times to safeguard the interests of the Nation and ensure the safety & security of its people.

The Raksha Mantri said the Government is closely watching the recent developments in Afghanistan which have posed new security challenges. “Security of Indians is a cause of concern for the Government. We also do not want that anti-India forces to take advantage of the evolving Afghan situation for cross-border terrorism,” he added.