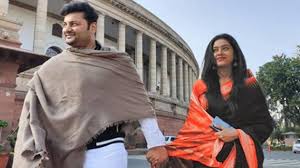 The High Court disposed off Anubhav’s petition seeking fixation of date for the final hearing of his divorce petition against his wife actress Varsha Priyadarshini.

Earlier, Mohanty had filed a contempt of court memo against Varsha at family court in Cuttack and also appealed the court to close the conciliation process and both had appeared at the Conciliation Centre in Cuttack for counseling.

The divorce petition filed by Anubhav at the Patiala House Court on July 6, 2020, has been transferred to the Cuttack Family Court on the orders of the Supreme Court. The Supreme Court had an order for an expedited hearing of the case.

Notably, the marital discord between Anubhav and Varsha came to the fore after a local court in Cuttack listed Varsha’s petition of domestic violence against her actor-turned-politician husband for September 7 last year.

2021-08-26
Editor in chief
Previous: Former director of CBI Umashankar Mishra passes away
Next: TPCODL a joint venture between Tata Power and the Government of Odisha has inaugurated its new corporate office