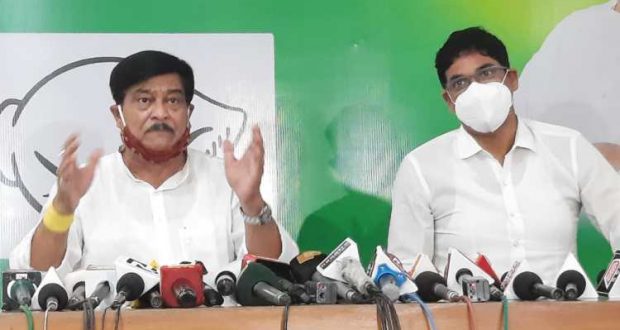 Bhubaneswar:24/8/21: Reiterating its demand for conducting caste-based census and removal of 50% ceiling on reservation, the Biju Janata Dal (BJD) on Tuesday criticised the Bharatiya Janata Party (BJP) for remaining silent on the issue.

In a press meet, BJD ministers Ranendra Pratap Swain and Arun Kumar Sahoo said that the party would hit the streets to garner people’s support on the issue on removal of the cap of 50 percent on reservation.

“At a time when BJP’s alliance partners in the National Democratic Alliance were demanding caste-based census. After the proposal for caste-based census was rejected by the Centre, Odisha Cabinet had given its nod for estimation of socially and educationally backward class population on January 11 last year. Subsequently, an OBC Commission was constituted,” stated said Ranendra Pratap Swain, Food Supplies and Consumer Welfare Minister.

Similarly, Odisha Agriculture Minister Arun Kumar Sahoo also accused BJP for remaining silent on the issue at a time when its alliance partners in the National Democratic Alliance were demanding caste-based census.

“Many leaders across the country are supporting the demand of Odisha Chief Minister Naveen Patnaik to undertake a caste-based census and increase the reservation beyond 50% ceiling. If these demands were ignored, the BJD would not be left with any option but to hit the streets,” Sahoo added.

Notably, a Parliamentary-party delegation of the BJD had also met Union Home Minister Amit Shah and given a memorandum in support of caste census.

2021-08-24
Editor in chief
Previous: Results of the offline Matric exams have been announced
Next: 197 COVID-19+ Cases Detected In Bhubaneswar