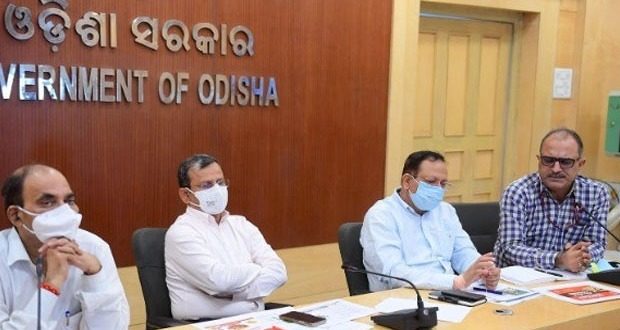 Bhubaneswar:23/8/21: Chief Secretary Suresh Chandra Mahapatra has directed the Departments of Agriculture and Farmers’ Empowerment and Cooperation to work out a joint marketing frame (JMF) with national agricultural cooperative marketing federation of India (NAFED). Mahapatra reviewed the activities of NAFED in Odisha and possibilities of further collaboration with the federation, during a high-level meeting here today.

Considering the possibilities for joint marketing of cash crops, Mahapatra directed the departments of agriculture, horticulture, scheduled tribe, and scheduled caste development to identify the cash crops which can be promoted for enhancing the farmer’s income.

It has been decided that some varieties of fruits, vegetables, pulses, oilseeds, millets could be produced and marketed on large scale in collaboration with NAFED, reports stated.

Managing Director NAFED, Sanjeev Chadha informed that NAFED as a farmers’ cooperative is also the nodal agency of the Government of India for the implementation of price support schemes and price stabilization schemes. The Federation would provide different support and assistance to farmers for cultivation, procurement, branding, and marketing of the cash crops in collaboration with the State agencies.

Mahapatra is advised to promote minor millets as super food throughout the country. Odisha produces many organic millets, fruits, and vegetables. The tribal population in 119 TSP blocks and 22 ITDAs are mostly accustomed to the production of organic varieties which could be marketed under a special brand. Organic cultivation clusters have also been created in districts like Koraput, Rayagada, and Kandhamal.

Mahapatra also directed that the JMF should have FPOs, SHGs, PACS, and ITDAs as the active partners in up-scaling the cultivation of cash crops and procurement of the produces directly from the farmers. Such strategies, he added, would prevent the possibilities of distress sale and enter in of unscrupulous middlemen.

2021-08-23
Editor in chief
Previous: Odisha Chief Minister inaugurated 10 ‘transformed schools’ in Hinjilicut
Next: Results of the offline Matric exams have been announced