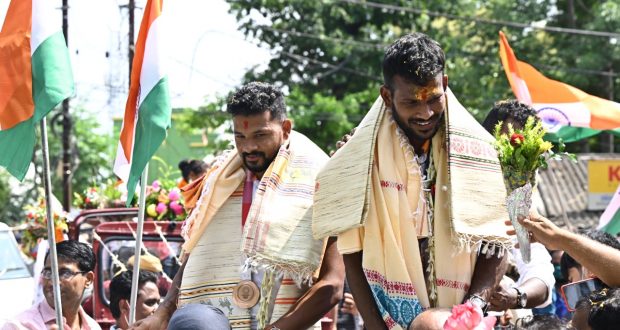 Sundargarh:21/8/21: Four members of the Indian men’s and women’s hockey teams-Amit Rohidas, Birendra Lakra, Deepgrace Ekka and Sunita Toppo who have made the country, and the State proud for their stellar performance by scripting history at the Tokyo Olympics were given a rousing welcome here-their hometown on arrival.

They were accompanied by former captain of the Indian hockey team Padmashri Dilip Tirkey.

The players were given a grand welcome by the district administration and the people of Sundargarh. 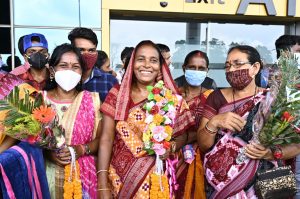 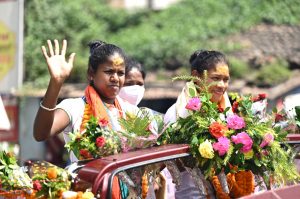 Upon their arrival at the Jharsuguda Veer Surendra Sai Airport at noon today officials of the district administration, and Sports department after welcoming them at the airport took them home to Sundargarh a distance of 22 km in a special carcade.

On their arrival at the Parijat Park here the stars of the Indian hockey team were taken on a tour of the town in an open SUV accompanied by bikers on a procession to the sound of dulduli (a typical set of huge drums played particularly in the western part of Odisha).

Large crowds welcomed the players with great enthusiasm apart from felicitating them at Sundargarh Public School and at different squares on the route.