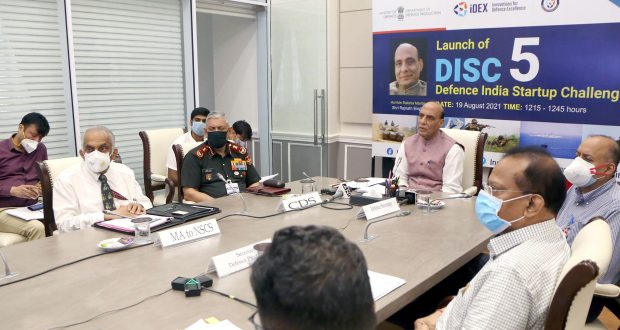 Lauding the efforts of iDEX-DIO, Shri Rajnath Singh, in his address, termed DISC 5.0 as another step towards independence in the defence sector as the launch comes at a time when the country is celebrating ‘Azadi ka Amrit Mahotsav’. Stating that DISC 5.0 is a reflection of Government’s resolve of creating an ‘AatmaNirbhar’ defence sector, he exuded confidence that this challenge will move forward from its earlier editions and take innovation, design & development to newer heights. He shed light on the previous four editions of DISC and said that more than 80 startups, MSMEs and individual innovators have joined as winners in over 40 technological areas. He added that modern and futuristic problem statements launched in DISC 5.0 demonstrate the confidence of young entrepreneurs and innovators in DISC.

The Raksha Mantri underlined the importance of creating a strong, modern & well-equipped military and an equally capable & self-reliant defence industry, given the rapidly changing geo-political and security scenario in the world. To realise this vision, he said, iDEX is playing a crucial role by providing a platform wherein the Government, Services, think tanks, industry, startups and innovators can work together to help the defence & aerospace sectors reach full potential.

The launch of DISC 5.0 by iDEX-DIO comes three years after the launch of DISC 1.0. The launch of DISC 5.0 is a massive leap towards leveraging the startup ecosystem to develop India’s defence technologies, equipment design and manufacturing capabilities. It will encourage startups to become more attuned to innovative concepts and inculcate the approach of creative thinking in India’s budding entrepreneurs.

The iDEX initiative was launched by Prime Minister Shri Narendra Modi in April 2018 to achieve self-reliance and foster innovation & technology development in defence and aerospace sectors.