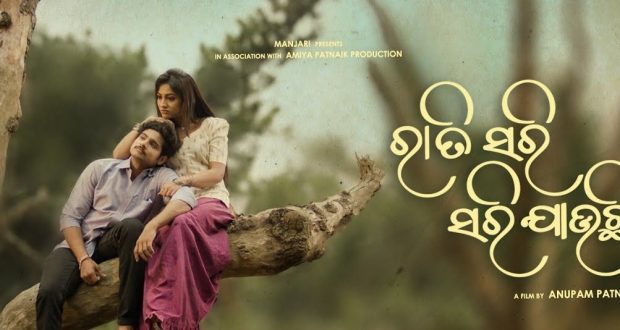 Odia movie Raati Sari-Sari Jauchi takes inspiration from a love story from the 90s. The lovebirds fail to enter wedlock due to all the hurdles that came their way, which eventually forced them to part ways only to meet after eight years. What happened next is what the movie narrates. This movie aired on Majari TV on 15th August 2021

The film opens with an interaction of Sagar (Rajesh) with his boss about the delivery of a new vehicle to a customer who lived in his native village, getting this assignment Sagar reached Dr. Rudra’s (Sukant Rath) residence. Due to some hurdles during the journey, Sagar reached Dr, Rudra’s village at late night with a new Audi car. When Sagar knocks at the door of Rudra’s residence, to his utter surprise, he finds that Simu aka Smita opens the door who once was his beloved. To provide an opportunity for them to interact with each other, both the writer and director create a situation where Dr. Rudra goes to attend to a patient in the outskirt of the village. Here the real story starts when both Sagar and Smita narrate the happening of the past which is presented in flashback. The story of their love journey ends within the night and justifies the title Raati Sari-Sari Jauchi.

The non-linear narration for the story is praiseworthy. Television is probably the best medium for these kinds of stories because you can use the entire film for flashbacks. It uses this storytelling to trick the audience into believing things about characters and then subverting those expectations by jumping in time.

As actors Sukant rath and Sampark were not shown in the trailer, they were the surprise pack and both of them lifted the experience every time they were on the screen. Other actors have done their part well. Rajesh, Sukant Rath, Master Sampark, Jeevan Panda, Nivvy and Anandi were good whereas Riya tried her best to come out of the stereotypical role she has played before. But actor Raj Rajesh has to be careful of his dialogue delivery and voice modulation. Unfortunately  the veteran actor Raimohan Parida’s overacting ruins the flow of cinema,

When contemporary movies are devoid of Odia essence, RSSJ has tried its best to imbibe Odia flavour through different events like performing Pala in the village, pouring water in Tulasi chaura, greenery of the village with the beautiful sound of chirping birds. Also, the references on Odia books and their authors and discussions on Kaul, Manisha, Amabasya ra Chandra, and Pratibha Roy was quite impressive.

Still, the movie is not without a few drawbacks. The flashback part of the movie seems to be quite slow and stretched. The scenes look repetitive rarely offering new experiences. It should have been properly edited to balance the “slow-past and” the “fast-paced present time” narration.

The movie also suffers from having too many words and less silence. There are many instances of unnecessary dialogues where scenes could have been made more powerful by silent treatment and facial expressions.

There are also few scenes that are seemingly far-fetched and lack a realistic approach. For an instance, the first meeting between Rajesh and Riya after Rajesh gives her a letter in the trekker as a burqa-clad woman is too unlikely. Their unexpected first hug was very far-fetched for a shy, fearful, and orthodox girl like Simu.

The movie also lacks in executing suitable emotion and reaction. For example, the revelation at the end about Sampark (Guddu) hardly sparks any emotion or reaction in Rajesh. The conversation between Rajesh and Riya goes as if they are having some normal chit-chat. Similarly, the twist in the last scene also lacks appropriate execution. The last few scenes needed sensitive treatment and they could have turned out to be brilliant if it had been taken care of properly.

The team should have done proper research on Audi as the Audi car came to India in 2004 whereas the movie shows an Audi showroom in Bhubaneswar in 2003. In fact, the first Audi showroom in Odisha opened only in the year 2013. Moreover, a middle-class doctor in an Odia village ordering an Audi in 2003 looks quite unrealistic.

During the last part of the movie, the narration of the train accident could have been referred to by showing the real footage of the accident while showing the clippings of the newspapers to give it a more realistic emotional touch. Also, the team could have given proper attention to the make-up, clothes, and hairstyles of the characters, especially Riya’s, as it was quite not in sync in many scenes in the movie

Apart from an interesting storyline, the movie consists of five songs. Srikant Panda is the music composer and credits for composing the songs are given to Sthita Patnaik, Rakesh Das, and Parambramha Tripathy. As the duration of the film is 180 minutes, one or two-song would have been decent. Also, given the slow pace of the film, its music could have been a little faster to balance it out. However, the lyrics of the songs are good and devoid of any Hindi or English words which is a welcoming change.

Despite few drawbacks, on the whole, the director Anup Pattnaik and writer and associate director Manash Padhiary have done a good job depicting the village and its culture and tradition in the movie Rati Sari Sari Jauchi. They have proved that a good film can also be made within a small budget by portraying rural background as Late Manmohan Mahapatra had done before.

2021-08-18
Editor in chief
Previous: Odisha State Pollution Control Board has been ranked No-1 in Transparency Index rating
Next: Edelweiss Tokio Life puts women advisors center stage in its new campaign